Five years ago, there were around 400 approved commercial drone operators in the UK. This number has now increased to over 5,000 and the UK’s skies are likely to get busier yet with hobbyist, commercial and public sector drones all in operation. Drones are already being used in more innovative ways such as to revolutionise crop health assessments, search and rescue operations, and aerial photography for film and TV. However, the general public has become understandably concerned about the improper use of drones following the incidents at Gatwick and Heathrow airport last Christmas.

At the beginning of 2019, the Government started work on a new strategic approach to countering the misuse of drones and have now launched a new counter-drone strategy, or the UK Counter-Unmanned Aircraft Strategy to be precise. The counter-drone strategy sets out how the Government will work in collaboration with industry, both those who manufacture drones and those who develop counter-drone systems, to crack down on the misuse of drones. The strategy also sets out to ensure that the UK does not miss out from the huge benefits drones can bring to our society and national prosperity.

To respond to a threat, you must first understand it. For that reason, the government’s commitment to working with industry to develop a thorough understanding of the risks is exactly what is required. This will be backed up by a ‘full spectrum’ approach to deter, detect and disrupt the misuse of drones, which calls upon the UK’s expertise in countering terrorism. The strategy will also work to reduce the upstream risk by partnering with industry to raise international security and safety design standards. Finally, the Government is bringing forward new legislation and securing access to cutting-edge counter-drone capabilities to empower the police and other operational responders to act.

A welcome first step is the formation of the new police mobile counter-drone unit, funded by the Home Office and equipped by the UK’s world-leading counter-drone industry, which ADS proudly represents through the ADS Drone Platform and Counter-Drone Special Interest Group. The police will also be granted the power to require a person to land an unmanned aircraft and issue new stop and search powers where a drone-related offence has been committed.

The risks from the malicious use of drones continue to evolve, precisely because the drone market itself is making exciting innovations in communications, agility, flight time and capabilities. These advancements will provide huge benefits, but they also present a challenge. Counter-drone technologies were key to stopping the recently attempted disruption at Heathrow Airport by environmental protesters, and it is this industry that will continue to work closely with the Government to counter the misuse of drones through this new strategy. 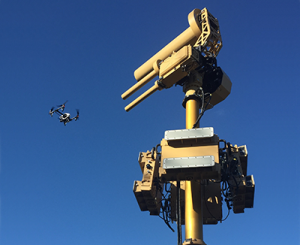