Home » Sustainability » Building a vibrant hydrogen industry in the UK

Building a vibrant hydrogen industry in the UK

Hydrogen is an important element to decarbonising aviation and reaching net zero by 2050. To that end, the UK Government this week unveiled their Hydrogen Strategy, a roadmap to drive investment in hydrogen technology and enable the uptake of hydrogen in innovative and exciting technologies that form part of the mix that will be needed to reach net zero.

The strategy targets total output of 5GW of low carbon hydrogen capacity by 2030, achieved through the production of two types of hydrogen – ‘green’ hydrogen, generated from water, and ‘blue’ hydrogen, which captures and stores the carbon produced in the generation of hydrogen. Also included in the strategy is a consultation on the design of the Net Zero Hydrogen Fund, £240m of funding to incentivise the scaling up of hydrogen production.

Hydrogen has a role to play in the UK’s Jet Zero ambitions that will help us reach net-zero aviation emissions in the UK by 2050 and power new generations of aircraft. Pioneering capabilities exist across the UK from high-tech propulsion technology and precision engineering to wings of the future, fuel systems and power electronics. The industry has a clear and credible plan on how to achieve this, through:

UK aerospace is already in a strong position for the development of hydrogen technologies. Companies such as Airbus and ZeroAvia are developing next-generation aircraft powered in part by hydrogen, and the Aerospace Technology Institute is supporting hydrogen projects across the UK, including the H2Gear led by GKN Aerospace. There could be significant potential for hydrogen in aviation, but successfully unlocking the sustainable benefits requires a long-term commitment from Government; collaboration between industry and the Government is the most effective way to reach net zero as soon as possible.

This week’s strategy is a welcome step in the right direction to developing a hydrogen industry that can generate jobs and investment across the country. Supported by sufficient investment, an innovative regulatory regime, and collaboration with industry, hydrogen can play a significant role in the long-term decarbonisation of aviation in the UK. 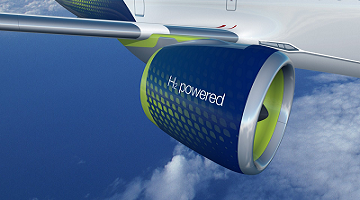