Our first profile of the day for International Women’s Day is Jess Poole, an Engineering Graduate Trainee from Rolls-Royce.

Just last week, Jess featured on the ADS Podcast ‘Winging it’ to discuss the Women in Aviation and Aerospace Charter. We asked her further about her experience as a woman working in the industry, and how to inspire other women to take up engineering.

What do you do?

I work as an engineer at Rolls-Royce, currently on the graduate trainee scheme. I’ve worked in a wide variety of roles, from Future Programmes, to Naval Marine, to logistics, and I’m about to finish the scheme and start working on Team Tempest – the UK’s programme to develop capability for a future fighter jet.

I’m a chemist by degree and moved into physical theoretical chemistry for my Masters’ year, before starting work as an engineer after I graduated from Oxford.

In my spare time, I love reading – anything from fantasy to dense non-fiction. I’m also involved with a range of charities, mostly helping people with learning disabilities get employment. Finally, I am always keen for sports that don’t involve balance. Ultimate Frisbee has been my favourite for a little over a year now.

What inspired you to work in the industry?

When I was very young, I watched a wildlife documentary about climate change and polar bears. Since then, I’ve been taking action to try to reduce our impact on the environment. Governments have a role to play through coordinating regulation, but I think industry participation and drive will be critical if we are to meet temperature rise targets set out in the Paris Agreement. The aerospace sector contributes about 2% to global CO2 emissions, and I believe that we have a responsibility to show that even a classically highly polluting area such as aviation can become clean and sustainable. This is only possible through brave innovation and new technology. I want to be able to have an impact as the sector is going through a shift in technology, and help to highlight the importance of a sustainable and conscientious future in the way we produce power.

What would you say to other women and girls who may be put off joining the industry because of its male-dominance?

I have been in several offices so far where I’ve been the only women, both during my masters’ year at university and while at work as an engineer. Although there are times where this is very noticeable, where it can be extremely challenging, and where I do think it can put me at a disadvantage, I would say that on the whole my experience has been that gender is largely unnoticed – day to day, I’m judged on what I do and not who I am. In many ways, I think STEM professions are better at this than many other areas, and I find engineers for the most part to be welcoming, as long as you have a shared interest and enthusiasm in the work. Being at work can often be a safe haven for me, where I can hide from societal expectations, because when I’m at work I’m just one of the team.

When I talk to women and girls about engineering, I often get a response of “but I’m not good at maths”. Firstly, for most of them, that statement isn’t true. Secondly, even if it is true, being strongly mathematical isn’t the most important thing in engineering – engineering is all about team work, communication, and being creative with technology. I think it’s a brilliant industry to work in for everyone, and I have fun every day that I’m at work.

What has been your most memorable or proudest moment?

As part of our training, the graduates are put on a week course to learn about hands on manufacturing, using tools such as a mill and a lathe. I was the only female in the group; in fact I was the only female engineer I saw in the entire college where we were trained. Unlike the others in my group, who had a background in engineering, I had never used these tools before. On day one, I was hesitant of the machinery, worried about making mistakes, and it was made all the more difficult by the fact I was physically not strong enough to operate many of the levers to tighten or loosen the equipment. Our instructor was less than impressed.

However, skip forward to the end of the week (image a Mulan-style video with “I’ll Make a Man Out of You” playing in the background), and I was one of the better ones in the group, particularly on a lathe. After the training, I took a lead role in our group’s hands-on manufacturing for the project, and I was told by a colleague that, on a day I wasn’t there, our instructor had told someone to go and ask me for my help, because I “knew what I was doing”. 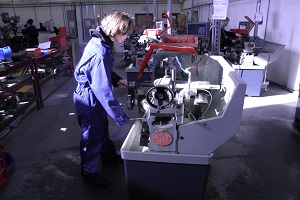