A Guide to Sustainable Aviation Fuels

Do you know your Sustainable Aviation Fuels from your Biofuels? Developing greener fuels is one element of the aerospace sector’s commitment to achieving net zero carbon emissions by 2050. Here’s our guide to innovation in sustainable fuels. 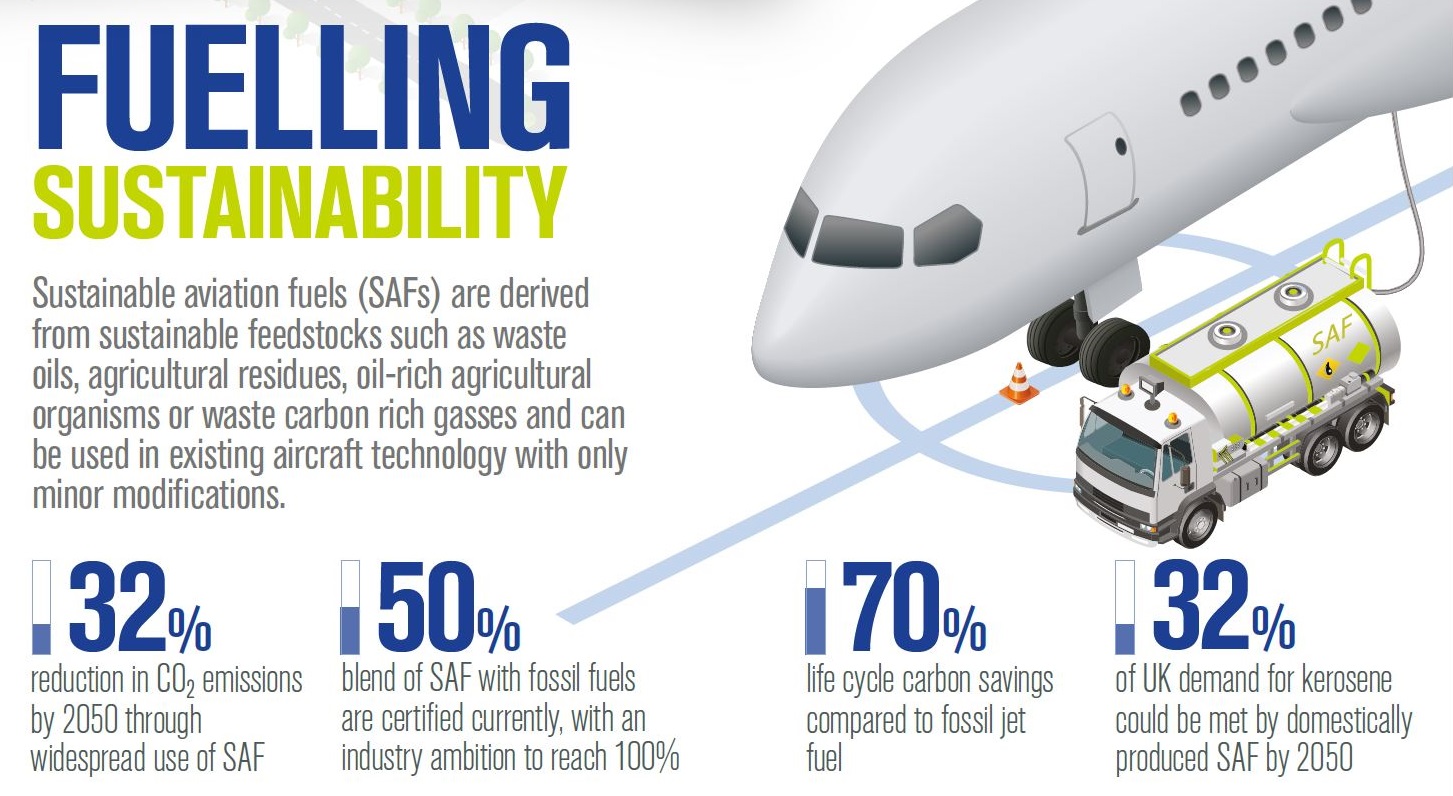 What is Sustainable Aviation Fuel (SAF)?

Sustainable Aviation Fuel (SAF) is a cleaner alternative to power aircraft. This is produced using renewable feedstocks such as waste oils and agricultural residues. SAF is capable of reducing aviation carbon dioxide emissions by up to 80% in comparison to using fossil-based fuels. 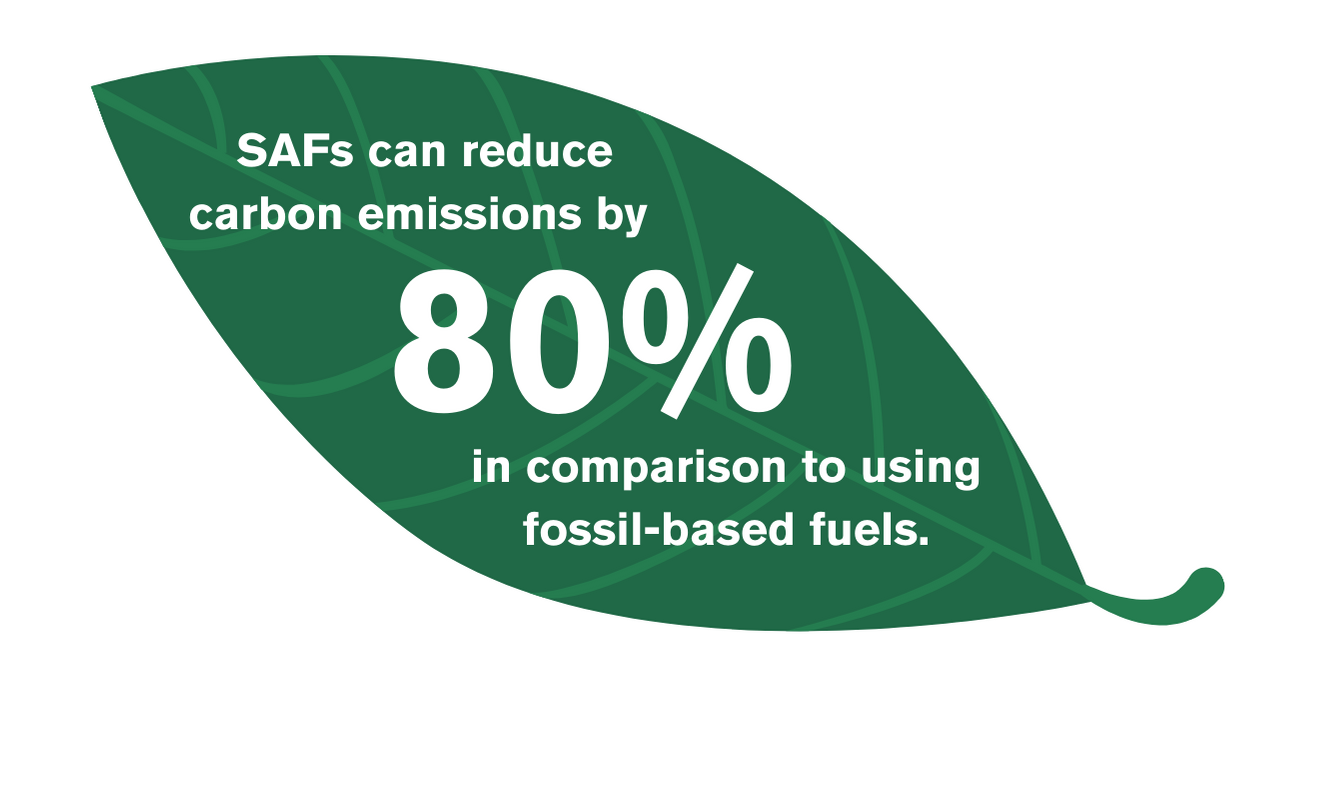 What is the difference between SAF and Biofuels?

‘Biofuels’ generally refers to fuels produced from biological resources (plant or animal material). Fuels can also be sourced from non-biological resources. However, these are not deemed sustainable and in some cases, they can be considered harmful to the environment. SAF is the preferred term used by industry to describe alternative fuels.

How is SAF made?

SAF is widely developed from biomass and feedstocks with a low carbon content to ensure that the carbon dioxide emissions produced during fuel burn are minimal. For a sustainable aviation to be used in aircraft, it must have “drop-in” characteristics i.e. automatically be used in existing aircraft technology and its performance must be comparable or exceed existing fossil fuels during the combustion process.

Certification and types of Fuel

The American Society for Testing and Materials (ASTM) International, have developed standards to approve the use of SAF on aircraft. Currently there are six approved methods of creating SAF which are known as production pathways. In addition to the certified sustainable fuels, Power to Liquid (PtL) fuels can be used as an alternative. PtL uses renewable electricity, carbon dioxide captured from air and water to form a sustainable fuel that chemically resembles conventional jet fuel. Despite more R&D work required and high implementation cost, PtL has its advantages over SAF. It is “drop-in” capable, uses renewable feedstock and does not require as much land compared to other types of SAF.

Who is using SAF today?

What is the production capacity today?

The map below shows the level of existing and potential production capacity around the world. 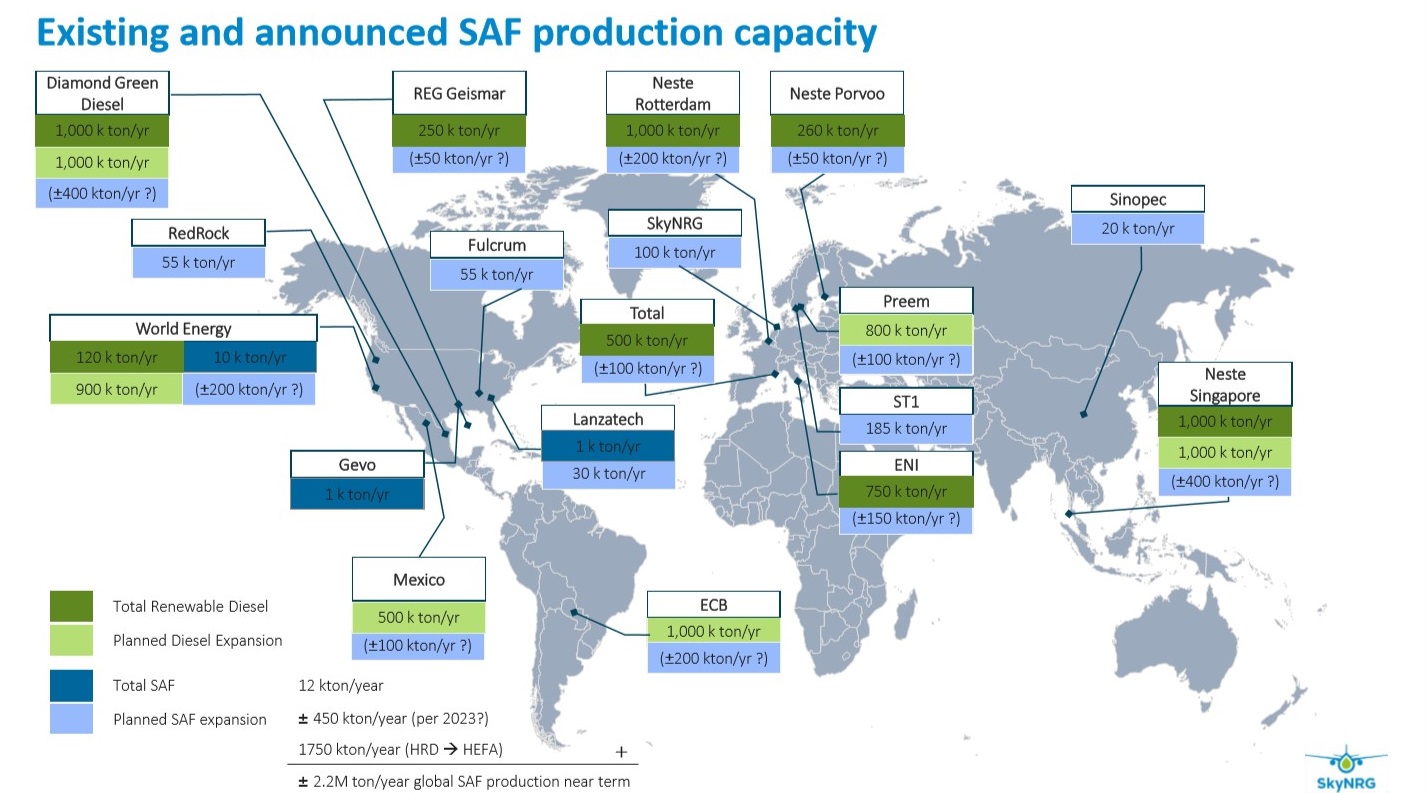 The EU alone has a maximum potential output of 2.3 million tonnes per year which could meet approximately 4% of the total fossil aviation fuel demand.

Current SAF capacity in the UK is minimal as seen in the SA chart below. This is why SA have outlined 4 key asks:

Who is developing SAF?

These companies are actively involved in SAF development and production (including new entrants):

Why aren’t SAF in more widespread use today?

Jet fuel is significant proportion of total operational cost of an airline meaning price volatility of crude oil affects long-term planning, which is a barrier to entry to the market. Kerosene is used in the blending process therefore any changes in prices could affect the supply of SAF on the market. 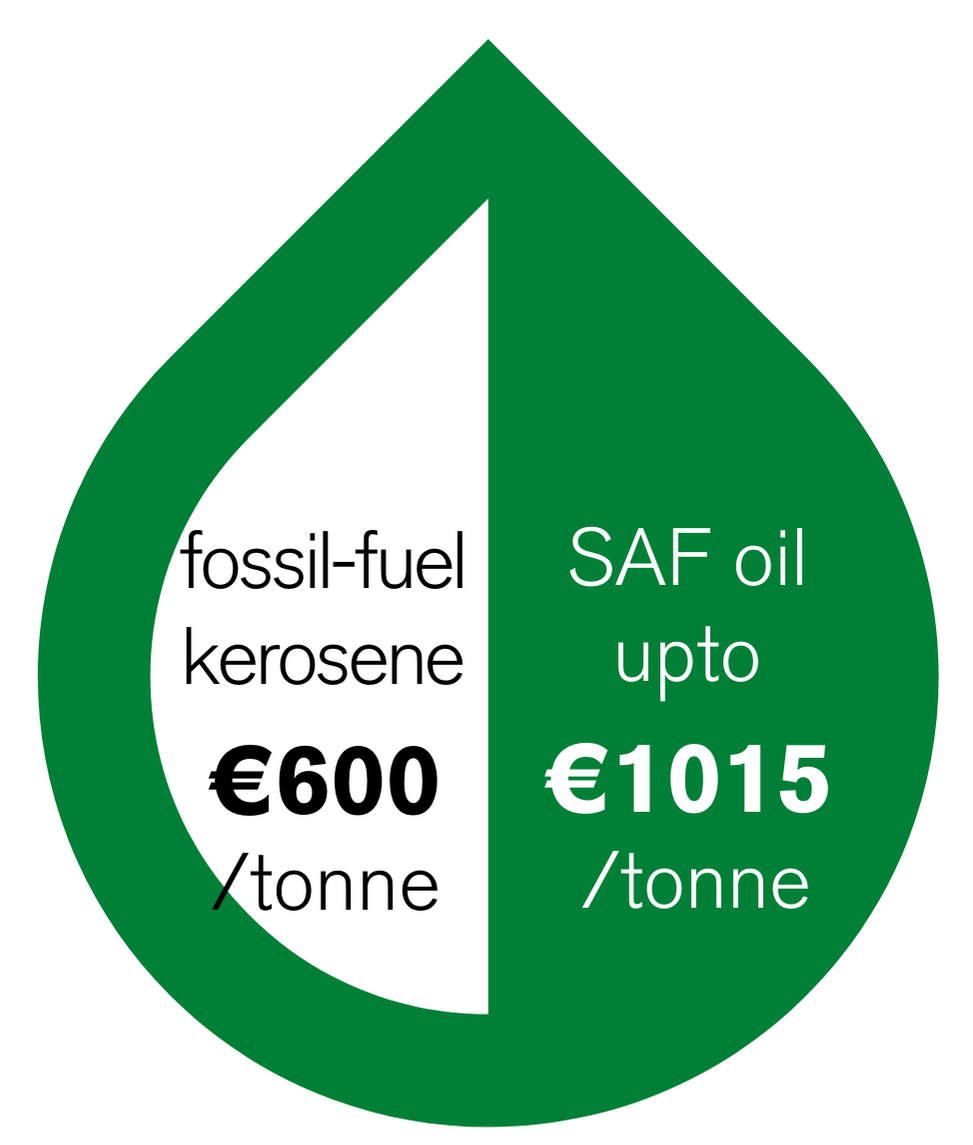 In Europe, the typical price of fossil-fuel based kerosene is €600/tonne compared to SAF made from cooking oil which could range anywhere between €950/tonne and €1015/tonne.

In order to reap the benefits of SAF, the price of SAF must be near or at cost parity to fossil fuels. This can be achieved through incentives but not at the same level as sustainable road transport fuels in order to drive an uptick in production and reduce competition between road and aviation.

Refining plants can easily switch between SAF and diesel production however due to the stricter specification for jet fuel, production of SAF is more expensive. Other cost drives include feedstock availability, supply chain and logistics which are not yet matured. In general, the limited infrastructure and without the economies of scales, means that the unit of production is higher than conventional jet fuel.

The factors discussed previously play a part in the limited supply of SAF compared to the total industry demand (less than 1% according to ATAG). To meet the demand, incentives and global policies must be introduced.

What are the benefits of SAF?

Carbon dioxide emissions can be reduced by up to 80% through the use of SAF.

More diverse geographic locations of supply for feedstock unlike fossil fuels which are reliant on areas where crude oil is drilled. This could also lead to the establishment of local supply chains, helping the local economy and creating jobs.

Potentials of Power-to-Liquid fuels in aviation

Reducing aviation’s impact on climate change will be a driving force behind the aerospace industry for the immediate and foreseeable future. Our Sustainable Aerospace Hub reflects the latest industry knowledge and insight. 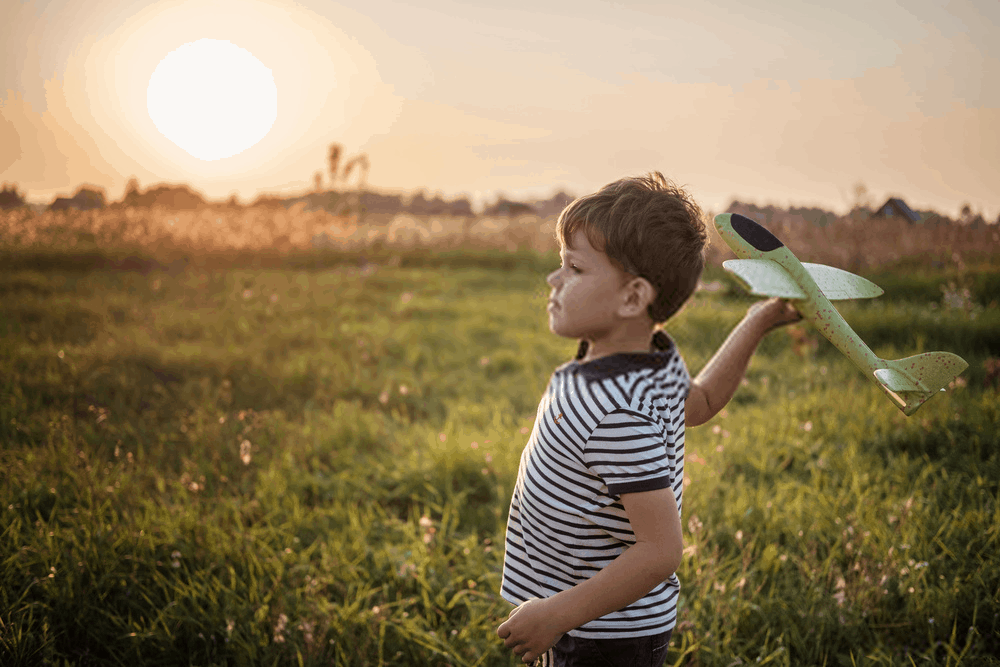