The annual ADS Apprenticeship Reception was held in the House of Commons last week which celebrated the important role of the 12,000 apprentices in the UK Aerospace, Defence, Security and Space sectors. The event was attended by more than 100 apprentices, industry representatives and over 60 MPs from constituencies spanning the length and breadth of the UK, including Secretary of State for Transport Chris Grayling.

Speaking at the event the Secretary of State highlighted the significant role that apprentices have in the future success of the industries in the UK economy.
He said: “As these industries evolve with an ever greater emphasis on emerging technology, we need young people with the ingenuity and skills to lead the charge, which is why we have made 2018 the Year of Engineering.”

The Year of Engineering is a government campaign which is aimed at encouraging young people between the ages of 7-16 to get involved in engineering careers. It has been launched to celebrate the world and wonder of engineering. This forms part of the UK’s Industrial Strategy which is committed to boosting engineering across the UK and help industries to recruit future talent.

The Secretary of State added that we, as an industry, have “homework” to do regarding the promotion of engineering to young people. He encouraged apprentices to get involved where they can, for example, taking part in STEM outreach programmes in their companies, or speaking at their previous schools and colleges, in order to inspire the next generation of young people and show what engineers do.

ADS works to support initiatives that encourage young people to get involved in STEM activities, for example the UK Youth Rocketry Challenge which encourages schools to build and launch their own rocket, and the upcoming Futures Day at Farnborough International Airshow in July 2018.
Futures Day, the industry’s single largest STEM and outreach activity, is designed to stimulate and encourage people aged 11-21 into the Aerospace, Defence and Space sectors.  Attendees include groups from schools, universities and youth groups who can take part in interactive, informative and engaging events throughout the day. The core of which is the Innovation Zone which allows students to experience aerospace technology of the future and meet with academic institutions.  All of which is aimed to inspire and attract the next generation of scientists and engineers who will play a key role in our sectors for years to come.

In the run up to our Futures Day at Farnborough International Airshow and as part of the Year of Engineering, we will be publishing a series of blogs, podcasts and vlogs to celebrate the contribution that young people provide to our industry and to inspire the next generation. 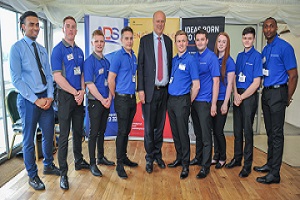