Women in aviation has flying start to the year

At Farnborough International Airshow 2018, Prime Minister Theresa May launched the Women in Aviation and Aerospace Charter, committing signatories to work together to build a more balanced and fair industry.

The Charter isn’t just a piece of paper to sign, put in a draw and to be forgotten about. It gives signatories real and achievable commitments to ensure that more women enter into our industry and that it feels open and accessible for women to work in aviation.

It’s no secret that the Aviation and Aerospace sectors are largely dominated by men, especially when it comes to engineers and at senior levels, but the Charter is working to tackle this by working on a report, giving women networking opportunities as well a sharing best practice.

The start of 2019 has been an incredible time for the Charter as it gains momentum across the aviation and aerospace sectors, now with a total of 82 signatories. Just last week, ADS held an event at the Titanic Museum in Belfast where Noel Lavery, the Permanent Secretary at the Northern Ireland Department for Economy, signed the Charter, alongside four other Northern Ireland companies: IPC Mouldings, Denroy Plastics, Moyola Precision Engineering and Bradfor.

Following this, earlier this week Flybe hosted a Women in Aviation seminar at their training centre in Exeter. Flybe gave an impressive presentation on all the work they’ve been doing on the campaign “Flyshe” where they are encouraging girls to think about a career in aviation. They showed a number of videos where girls as young as 10 were already saying they couldn’t be a pilot or an engineer as they’re jobs for men.

Gender stereotypes are ingrained into children at a young age, with Flybe working with the motto “Young girls cannot be what they cannot see”. As the largest domestic airline in the UK, Flybe are working hard to break down these stereotypes to encourage girls into careers that they don’t typically think they can work in.

The government is also continuing to work hard on stressing the importance of the Charter, with the Charter forming part of both the Aerospace Sector Deal and the Aviation Strategy launched in December.

The Aerospace Sector Deal has a specific focus on enhanced collaboration between government, industry and education to work on the future talent pipeline, including encouraging more girls and women into the sector.

The Aviation Strategy also recognises the importance of complementing the Aerospace Sector Deal and industrial strategy to tackle the diversity problem which will unlock a pool of talent for our sectors.

It’s been a positive start to the year so far for women in aviation and aerospace, but there is still a long way to go to make our sectors more accessible and open to all. 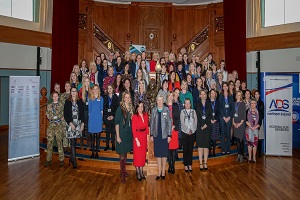