Steps towards sustainable aerospace at COP26

Over the past two weeks in Glasgow, COP26 has moved the conversation on in many important topics that will be crucial to reaching the targets set out in Paris six years ago – from agreements on deforestation to the commitment on private capital, the progress from COP26 is clear. Aviation and aerospace are taking the sustainability challenge seriously, as was made clear at ADS’ pre-COP26 event, and the gathering in Glasgow proved another fruitful step down the path to the clean, sustainable aviation of the future.

Wednesday 10 November was Transport Day, and alongside announcements on electric vehicles, sustainable shipping and the future of mobility, the UK Government launched the International Aviation Climate Ambition Coalition, a global group of nations committing to work together towards net zero for aviation.

Signed by 23 countries, including the UK, US, and nine EU members, the declaration committed the signatories sustainable aviation initiatives, including supporting the adoption of a long-term goal at ICAO, maximising the effectiveness of aviation’s global offsetting mechanism, CORSIA, and promoting the development and deployment of new technology to reduce aviation’s carbon footprint.

Ahead of the ICAO General Assembly in September 2022, this united front on the road to decarbonisation will go a long way to moving global industry towards greater action on sustainability, and ADS are looking forward to working positively with the UK Government to deliver on the ambitions of the coalition.

One of the most important elements on the pathway to net zero will be ramping up the production and usage of sustainable aviation fuel, or SAF. Over the course of the last year, we have seen the industry moving from talking about SAF to acting on SAF and at COP26 this week, the Clean Skies for Tomorrow initiative released the SAF Policy Toolkit, an invaluable resource for policy makers all over the world and in every part of the air transport industry.

The Toolkit provides policy options and strategies that nation states and businesses can use to roll out and scale up the roll that SAF plays in global aviation – with an ambitious target of 10% SAF uptake by 2030, action is needed now and the Toolkit will provide an additional lever in that mission.

There were many other announcements that will bring the reality of sustainable aviation one step closer, including the launch of the Glasgow Breakthroughs, featuring £200m of UK support for green hydrogen, Direct Air Capture and SAF, the unveiling of the First Movers Coalition, where 25 major multinational companies committed to buying green technologies including SAF, and the news that Rolls-Royce has signed a strategic partnership to create a centre for climate-tech businesses right here in the UK.

One clear takeaway from COP26 for aerospace is that the industry is no longer just talking, but doing. The road to net zero is not an easy overnight accomplishment, but through working together and positive commitments on innovation, finance and investment, sustainable aviation can be within reach. The next major waypoint for the aviation industry will be the ICAO General Assembly next year, but in the meantime, ADS are looking forward to working with industry and Government colleagues on sustainability at the Sustainable Skies Summit in January and the Farnborough Airshow in July 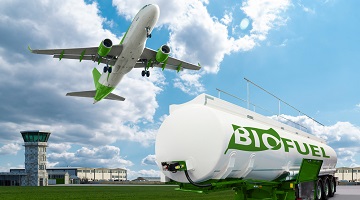