Last week, the Department of International Trade published a new Global Trade Outlook which aims to look at long-terms trends of global growth. The research piece is informal analysis and neutral projections based on current trends which broadly concludes that there will be global GDP growth over the coming decades, albeit at a slower pace, and that future growth of global trade and the makeup of GDP will be services led.

The report examines the potential shape of global trade over the coming decades. Near-term growth is tied to the International Monetary Fund’s April 2021 World Economic Outlook forecasts (2021-2026) and the long-term projections out to 2050.

This not only sets a scope beyond the immediate impacts of the COVID-19 pandemic but also enables the report to acknowledge other economic, political, technological, and environmental risks and uncertainties that may arise and disrupt this projected growth path.

In addition to the broad conclusion above, the report also suggests that if current population and economic growth continue as well as current and trade patterns then we should expect that:

On the UK specifically

According to the report, the UK share of global exports (3-year average 2017-2019) is dominated by financial and business services, but also by the export of Aerospace and other transport equipment. The chart in the report demonstrates the comparative advantage the aerospace sector in the UK has, and its strong position in terms of goods exports at almost 10% share of the sectors global exports.

Aerospace is also an area of the UK’s specialist sectors that is expected to grow faster than the global average in the coming decade. More information on the value added in the UK and origin of inputs is detailed in the report which provide a boost the value of UK goods and services. 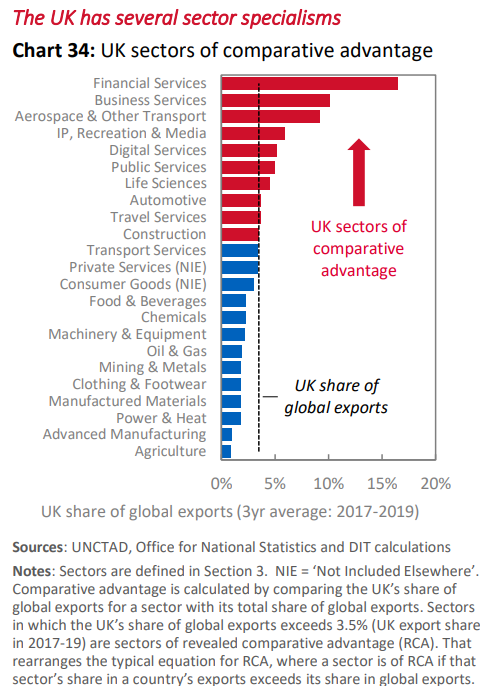 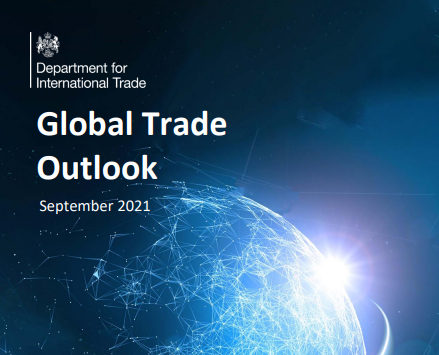