The North Halifax Grammar School team presented the design and build of their rocket, reflecting on the challenges and findings in test phases, as well as their overall experience of the UK Youth Rocketry Challenge (UKRoC), which they won to reach the international final.

The second part of the international finals required the teams to design, build and launch a model rocket, with three raw eggs inside – representing the three astronauts from the Apollo 11 mission for the 50th anniversary of the moon landing. They needed to get closest to 856 feet in altitude within a desired timeframe of 43-46 seconds. In a closely fought fly-off, the winning rocket flew closest to the required time limit and altitude. The French and Japanese teams placed joint third, with the USA in second place and the UK as the overall winners.

“My warmest congratulations to the team from North Halifax Grammar School who have done an outstanding job in beating the USA, France and Japan to become international champions in the Youth Rocketry Challenge. It’s been great to see the progress they have made throughout the competition, and they should be incredibly proud of their performance at Paris Air Show where they demonstrated that they were the best team to represent the UK.

“The Youth Rocketry Challenge is a great example of how industry can support and encourage young people into exciting careers in aerospace. The skills that have been demonstrated by all of the competitors are remarkable for their ages and I congratulate all of them on making it to the international finals.

“I would encourage anyone aged 11-18 who has an interest in STEM, or even who wants to build on teamwork skills, to participate in the Challenge next year. We’re keen to have good representation from across the UK, inspiring future engineers across the country and it was great to see a team from the North of England win the international finals.”

The NHGS team are the UKRoC champions, beating teams from across the UK to win a place at the international finals at Paris Air Show.

The aerospace and space industries collectively employ 110,000 people across the UK, at companies such as Lockheed Martin, Airbus, BAE Systems, GKN, MBDA and Rolls Royce and are supported by nationwide supply chains. UKRoC is a great introduction to the skills used by many of these organisations which provide high-value and well-paid careers locally. 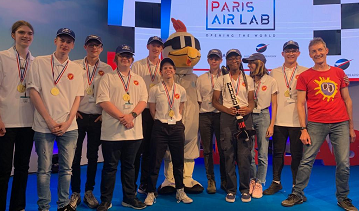