Home » News & Analysis » Industry & Member News
Posted on 26 February, 2019 by Advance
Theft of electronic bicycles in the Netherlands has become a significant issue in recent years but now a new track and trace security solution developed by G4S and AXA has made it a lot harder for thieves to get away with it.
Courtesy G4S


The popularity of electronic bicycles (eBikes) has seen a remarkable rise in recent years, with around 34 million e-bikes sold worldwide in 2017. China is by far the largest market for eBikes, accounting for over 32 million of those sold in 2017 but people in Europe and North America are now buying them in increasing numbers.

In the Netherlands close to a million new bicycles of all types are sold every year. Five years ago e-bikes accounted for a tiny percentage of total bike sales but now around 400,000 of the bikes sold each year are electronic. The invention of new high speed eBikes, capable of speeds of up to 45 km/h, is expected to lead to an even bigger increase in their use, with some predicting they will replace the use of cars in major cities within the next couple of years.

With this marked rise in popularity, it won’t be surprising that eBikes have caught the eyes of criminals. In fact eBikes are three times more likely to be stolen than normal bikes in the Netherlands, with the latest estimates showing that thefts of eBikes have more than doubled in the last three years to around 25,000 a year.

With the average eBike now costing over €2000 in the Netherlands and up to €450 a year to insure, G4S teamed up with Conneqtech and AXA Bike Security to develop a track and trace solution, AXA-IN, to deter would be thieves and help to locate stolen eBikes.

Above: The wheel and gear for an electronic bike (eBike).
Courtesy G4S


“For eBike owners in the Netherlands, insurance has become a real issue in the last couple of years” said Corinne Eeken, who oversees the project for G4S Monitoring & Patrol. “Thefts of e-bikes are so frequent that it has become very expensive to insure them, and most insurance providers won’t insure the e-bike at all in major cities such as Amsterdam, Rotterdam and The Hague. There was a clear need to come up with a solution to make eBikes more difficult and risky to steal, and that is exactly what we’ve created with AXA”.

In partnership with the e-bike manufacturer Sparta, thousands of e-bikes in the Netherlands are now being secured by the innovative AXA-IN track and trace security solution. A device is hardwired into the eBike which sends out a GPS signal of the e-bike location if it is reported stolen. As soon as the owner discovers that the eBike has been taken, they can report it via the AXA-IN app on their smartphone. This alert goes through to the G4S control room in Amsterdam which can locate the eBike via the GPS signal and work with the police to bring it back to its rightful owner.

Corinne Eeken, G4S Monitoring & Patrol, said: “The AXA-IN device is built into the e-bike and can’t be removed without causing significant damage to the e-bike and breaking it’s electrical circuit.” Corinne explained. “We can instantly locate the stolen bike using the GPS, our patrol guard verifies the position of the stolen bike and we have an agreement with the police that the recovery of vehicles with an alarm will be treated with high urgency.”

“Our secure solution makes it far more difficult to steal an e-bike and not get caught. Thieves will quickly learn to think twice before targeting a bike secured by AXA-IN."

The solution goes further than just locating eBikes after they are stolen. With the agreement of the bike’s owner, G4S can use the device to put in place an 'electronic fence' around the bike when it is parked, which sends an automatic alert to the control centre if it unexpectedly moves, falls over or is removed from the indicated area.

“The ‘electronic fence’ means that we can become aware that a theft is taking place straight away, and work with the police to apprehend the thief before the bike is taken” said Corinne. “If the thief does get away with the eBike before police arrive, track and trace kicks in and we can guide the police to wherever the stolen bike is taken to.”

“Our secure solution makes it far more difficult to steal an eBike and not get caught. Thieves will quickly learn to think twice before targeting a bike secured by AXA-IN, and people buying stolen eBikes from unauthorised sellers shouldn’t be surprised when the police knock on their door to get it back.” 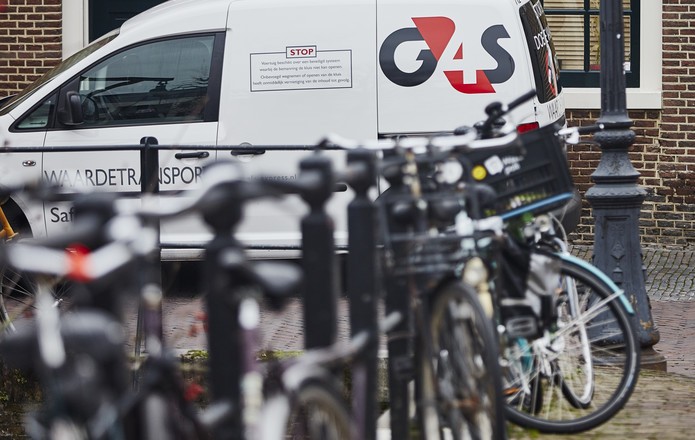