The Justice Secretary was joined at the site by council leaders and senior representatives from Kier – who were awarded a £253 million contract earlier this year for the design and construction of the new prison.

The 1,680-place category C jail is a major element of the Government’s bold strategy to create a modern, efficient prison estate that is fit for the future.

The prison is expected to open in 2021 and will be built on the site of the previous HMP Wellingborough, which closed in 2012.

Speaking at the event, the Justice Secretary told attendees that HMP Wellingborough will provide a major boost to the local economy - creating 100 new jobs and 50 apprenticeships, with a target of at least 25% of jobs being filled by ex-offenders. Once the jail becomes operational, hundreds of additional new jobs will be created in the prison.

Justice Secretary, Rt Hon Robert Buckland QC MP, said: "Modern and efficient jails are at the heart of the Government’s plan to create a justice system that protects law-abiding citizens and cuts crime.

"The new prison at Wellingborough will create and support hundreds of jobs, both during construction and afterwards, and will be a major boost to the local economy.

"The prison will also provide a better environment to rehabilitate offenders and ultimately keep the public safer."

The new jail at Wellingborough will provide almost half of the 3,500 new prison places that are already being delivered - with construction of a further prison at Glen Parva in Leicestershire, due to start in 2020, while a new houseblock at HMP Stocken in Rutland, opened in June.

The Prime Minister also announced last month that the Government will invest £2.5 billion to transform the estate further, creating an additional 10,000 new places that will boost rehabilitation and cut reoffending. Outline planning permission for a new 1,440-place prison at Full Sutton was granted last week.

The funding will also be used to bring previously decommissioned prison places back into use through extensive refurbishment and maintenance work.

This comes alongside an investment of £100 million to bolster security and stability in prisons, in addition to £70 million committed previously.

This will fund tough airport-style security, including X-ray scanners and metal detectors, across the prison estate to clamp down on the drugs, weapons and mobile phones that increase the risk to our officers and hinder rehabilitation. 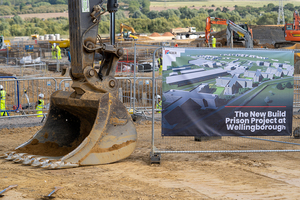