Supercharging science: working with Dstl as part of the UK science superpower

The head of Dstl, the Defence Science and Technology Laboratory, today called on the UK’s science and technology sector to work with the MOD agency in a bid to ‘supercharge’ innovation to keep communities ‘secure, safe, and prosperous’ in the face of ‘future threats’.

In a rare public appeal, Doug Umbers, interim head of Dstl, said the organisation expected to fund around an extra £1bn work in industry and academia over the next four years, following an increase to the defence budget.

In an open letter, Mr Umbers made a direct plea to people and organisation that have not worked with defence before – and invited them to a tech summit held by Dstl on 22 July.

“We need to harness the power of science, technology, engineering and innovation from across the private and academic sectors – from the individual inventor, to tech start-ups and beyond,” he said.

“As well as funding to fast-track your innovation, we offer access to our world-class scientists and facilities, the chance to work with the potential users of your technology, and the opportunity to make a difference by keeping our country safe.”

Dstl, the science inside UK defence and security, will be at the forefront of delivering world class and cutting edge capabilities for the Armed Forces and other Government departments as they tackle future threats ranging from terrorism and hostile states through to climate change.

There will be a focus on Artificial Intelligence, Automation and Robotics, Cyber, Space, and Weapons in line with the priorities set out in the Integrated Review, Defence Command Paper, and the MOD Science and Technology Strategy.

The next four years marks the most ambitious programme by Dstl in its 20 years as an organisation.

This programme will also be delivering on the Defence and Security Industrial Strategy.

Find out more about how you can get involved

If you work in UK science and technology, registration is now open to attend Supercharging Science: working with Dstl as part of the UK science superpower.

The virtual briefing on 22 July will feature an introduction by Mr Umbers outlining Dstl’s vision and ambitions. Chief Technical Officer Andy Bell will outline some of the challenges Dstl is looking to solve.

There will be a series of sessions looking at individual focus areas such as Artificial Intelligence and Space, as well as a session led by Dstl’s commercial team on how to work with Dstl.

More information about how to work with Dstl can be found via gov.uk/dstl. 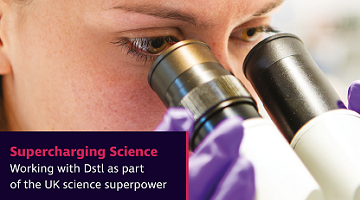