Last week saw the launch of a report looking at how enhanced R&D tax credits can support growth, jobs and levelling up.  Led by the Association of the British Pharmaceutical Industry, the report titled Making the UK a science superpower has been signed by Paul Everitt from ADS and other industry leaders from major UK industry sectors including, Tech UK, ABHI, CBI, FDF, Make UK and UK space.

What is the current landscape of UK R&D?

Compared to other advanced economies the UK economy still invests too little in R&D, at only 1.7% of national income, well below the OECD average of 2.4%. A key reason is that there is too little incentive for businesses and investors to make the UK their R&D base.

What is in the report:

The report acknowledges the commitment from the UK government to make the UK a global leader in technology a science superpower and sets out a proposal to unlocking more R&D investment in the UK through the more effective use of R&D Tax Credits.

Calling for a simple change of policy to allow the capital expenditure needed for research sites, factories, laboratories, and machinery to qualify for R&D tax credits.

Research in the report sets out how the UK needs to enhance its R&D investment incentives in order to remain competitive, a message that is particularly important for many sectors still suffering the effects of COVID, and how a reform to R&D Tax Credit can help kick-start growth, that will help to level up those parts of the country that desperately need it.

The report has five main chapters that cover the following:

Why the Government should care about enhancing R&D tax credits

The economic importance of R&D is indisputable, and Governments own target is to spend 2.7% of GDP on R&D. Reform to the current Tax Credits system will help achieve that.

R&D has been growing in the UK and helps support many high value jobs which are unfortunately particularly susceptible to economic downturns, so right now, need extra support.

The recognition of capital within the R&D tax system should also be a focus of policymakers’ attention  as the current system ultimately disincentives R&D capital expenditure.

Reform to R&D tax credits should encourage greater levels of R&D generally which creates growth and net benefits to the UK including job creation.

How R&D tax reform can support levelling up

Growth and employment would contribute to the Government’s levelling up agenda if addressed through R&D tax credit reform as it will enhance manufacturing investment which is typically more capital intensive  and prominent in areas beyond London and the South East.

The full report is available to read online now. 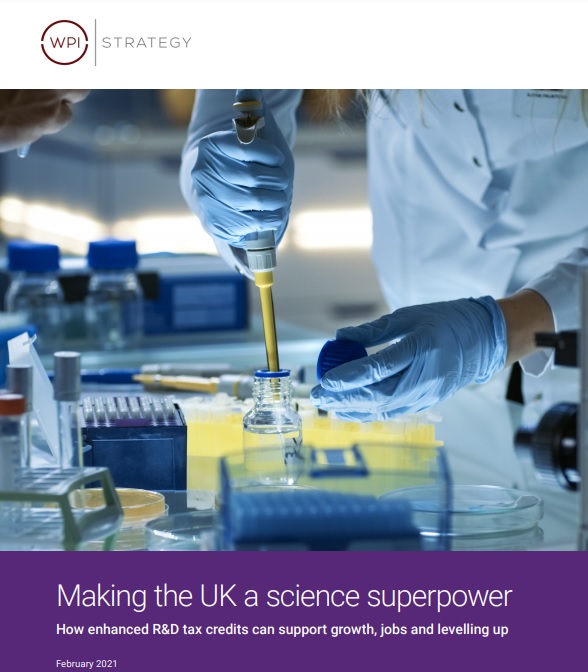