Home » Blog » Aerospace » The Politicisation of Aerospace: In conversation with Richard Aboulafia

On a recent trip to the United States, ADS Chief Economist & Director of Policy Jeegar Kakkad spoke with Richard Aboulafia, Aviation Analyst at Teal Group, around some of the issues in the industry.

Jeegar: With some of the challenges around the Boeing 737-MAX, we’ve seen global regulators ground the aircraft and come together to discuss the state of play. I felt a bit cynical when I saw that the Chinese regulators were the first to ground their fleet, it felt like there was more than a bit of politics playing a part. Do you think that’s true?

Richard: That’s right and how can it not be? As you say, there’s no way it wasn’t politicised, it wasn’t even 24 hours after the crash that the Chinese grounded the jet. Now, they’re well within their rights to do that, but that proved without a doubt that there wasn’t any evidence-based or data-based approach to make this decision. That really opens the door to politicisation.

Jeegar: And how much is aerospace being tied into that wider higher-level geopolitical issue between the US and China and that ongoing trade war?

Richard: At the end of the day there are issues in the US due to the relationship between the regulators and the contractors but in China it’s all one in the same – the government, the regulator, those who build the aircraft, they’re the same people. So inevitably, you’re going to have this cooperation and that really adds an element of uncertainty here, hopefully though we can overcome that. In my ideal world, there would be a broader negotiated trade settlement between the US and China, and at that point you will see the Chinese Aviation Authority’s whole issue with recertification magically dealt with.

Jeegar: We’re also seeing aerospace being politicised and drawn into the lower level trade dispute between the US and the Europeans. Do you think that there’s going to be an easy resolution, a peaceful resolution around the ongoing Airbus-Boeing dispute?

Richard: The treaties that we’ve arrived at in the aerospace world, particularly the World Trade Organisation’s agreement on trade and civil aircraft, demonstrate that we’ve been leading the way in keeping borders open to a global business but there’s so much at risk here of it being reversed.

Jeegar: So the risk is that it gets tied up into the very political automotive tariffs, steel and aluminium tariffs, and built up into something bigger between the US and the EU?

Richard: Yes I think there’s a lot of risk here and I’m not saying that one side has a better point over the other, it’s just that right now the Trump administration, after going back and forth, is heavily dominated by trade warriors – the likes of Robert Lighthizer, Wilbur Ross and Peter Navarro. These people take a very aggressive stance to trade and that makes it very dangerous, at least for as long as the Trump administration is in charge. Again, it’s not to take sides either way but given the level of populism seen in the US and now increasingly in Europe too there is a risk of the incredible advances we’ve seen in free trade in the aerospace world being undone.

Jeegar: Richard, thank you so much.

Read more on the trade tensions. 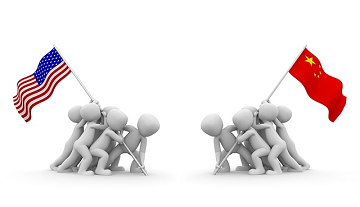