Hybrid Air Vehicles Limited, based in Bedfordshire, is the company behind the highly publicised Airlander. The Airlander is an inspirational and innovative British design created by pioneering British engineers and takes its role in stimulating the next generation of scientists, technologists, engineers and mathematicians through its STEM outreach programme and multiple apprenticeships very seriously.

Since 2015, HAV has been supporting two Level 3 Engineering apprentices as well as a Level 3 Business Administration apprentice, in partnership with Bedford College. HAV is incredibly proud of the hard work and dedication shown by their apprentices, and are supported by company’s committed team of engineers -many of whom started as apprentices themselves.

“It’s great to see how young people have come into the business and are now developing great skills to enable them to have a fantastic career in engineering.”

Here is what some of Hybrid Air Vehicles apprentices had to say: Why did you choose / what inspired you to become an apprentice?

I chose to start my career in aviation through an apprenticeship because I felt this was the best way to get into industry. Whilst undertaking my apprenticeship I don’t only learn the theory aspect at college but I get valuable hands-on knowledge from working at Hybrid Air Vehicles, on the new revolutionary Airlander!

What advice would you give to other people considering an apprenticeship?

To anyone considering an apprenticeship, I would give the advice to just go for it. University never appealed to me so an apprenticeship was the best option. You gain vital hands-on experience and the company pay for your education. If you impress your company, they may choose to send you on to complete a HNC then onto a HND, which is equivalent to the first year at university.

In short…the Airlander itself. Yes, there are smaller individual projects that are undertaken but the overall picture and goal is to build the Airlander, which is the most exciting project. One of the projects I’ve been involved with to achieve a finished, flightworthy aircraft has included rigging the fins, which was extremely challenging as one small change to a cable could affect the angle or tension of the other cables. I’ve also been highly involved in working inside the hull. This is extremely interesting and exciting as it’s something you won’t experience in any other aviation job; just entering the hull alone is exciting as you have to fight your way in against the air pressure trying to escape and then once you are in it is pitch black. 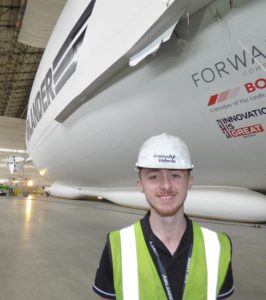 What is your favourite thing about working at Hybrid Air Vehicles?

The most exciting job so far I would say is working inside the hull of the aircraft. Not many people can say they have been inside the hull of an airship! I have completed countless hours of work inside the hull throughout my apprenticeship so far and it’s such an unusual job. Inside the hull it is a very dark and large area and we have to wear head torches to see what we are working on, and to see where we are walking.

Why did you choose / what inspired you to become an apprentice?

As a kid I was always intrigued by aircraft and engineering. I wanted to become a pilot but then also wanted to work on the tools of the trade and couldn’t make a decision on what path to take. So, I combined them together and decided to look for a career in the aviation engineering industry. Being an apprentice you get to learn in the classroom and get hands-on experience at the same time. I wanted to become an apprentice because it’s a great way to get a foot in the door and get into the career that I wanted to pursue whilst gaining valuable experience.

Operating from three sites across the UK, Aeromet International Ltd specialises in aluminium sand and investment casting, supplying aerospace and defence customers with a range of airframe and aero engine components.

Aeromet has a long history of training and promoting apprentices to the extent that the current Managing Director, as well as other senior staff all joined the company as an apprentice.

Here is what an apprentice at Aeromet had to say: 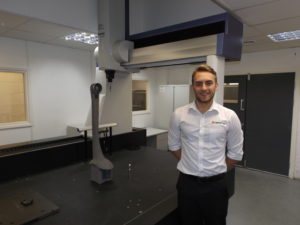 What is your favourite thing about working at your company?

The environment I work in is fantastic; I feel valued and part of the team. I’m very proud to be in the position I’m in – Aeromet has truly helped form the person I am today. Aeromet is a great place to be an apprentice – as so many former apprentices are now in senior positions in the company there is a proven career path and role models to look up to and learn from.

I had the opportunity to develop a new supply chain for Aeromet. This involved visiting and auditing potential suppliers all around the UK. I produced a report comparing all the companies I visited and presented it to senior managers. Once the best supplier was chosen I assisted with the transition of work.

What advice would you give to other young people considering an apprenticeship?

Do it. I strongly believe apprenticeships can open far more doors then A Levels can. Being exposed to a professional working lifestyle allows you to build the confidence needed later in life.  Completing an apprenticeship does not mean you cannot progress to university. My company have been generous enough to fund my education since I left high school.

Oxford Space Systems, based at the Harwell Campus Space Cluster, develop deployable structures for the space sector, collaboratively working with global space companies. The company, which

Although Oxford Space Systems do not currently have apprentices they are actively working on an apprenticeship programme as they understand the importance of the next generation of skilled workers to secure a highly skilled future work force and to generate opportunities for local school leavers.

There is currently work underway to explore the viability and appetite of business at the Harwell campus to offer a Harwell Apprenticeship Scheme.  If such a scheme comes to fruition, Oxford Space Systems would have an OSS apprentice that would undertake a ‘tour of duty’ to other high tech engineering and science based entities on campus, before returning to OSS.

It is positive to see a venture capital backed, early stage space technology business such as Oxford Space Systems – founded by an ex-electrical engineering apprentice – keenly values apprenticeships and is actively exploring taking their first apprentice later this year.