Posted on March 6, 2019 by Heather Gilchrist

The UK’s defence industry is vitally important to our current and future security. In January, Charles Woodburn, the CEO of BAE Systems spoke about the value of the UK defence industry at the ADS Annual Dinner.

Charles said: “I see a community with an unwavering commitment to excellence, an unparalleled ingenuity, and a strong determination that will underpin our nation’s future prosperity and security.”

The same commitment and determination are shown by our next apprentice for National Apprenticeship Week, Ahmed Munshi who is based in Preston and is in the penultimate year of a Higher Apprenticeship in Project Management at BAE Systems. The five year programme leads to an Associate Project Management qualification and degree in project management.

Ahmed’s school careers advisor suggested the university route and coming from a professional background, Ahmed also had family pressure to apply to university. He said: “Initially my Grandmother had aspirations that I would take the traditional route to university so when I raised apprenticeships as an opportunity there was a concern about this path. I promised my Grandmother I would fully understand what this apprenticeship path entails and so I started my research.”

“The more I researched the more I became convinced this was going to be perfect for me with academic qualifications and work combined. One employer caught my eye; I was determined to secure a role with BAE Systems who are exemplary in apprenticeship provision. Being a multinational defence, security and aerospace company made the work prospect really attractive with exposure to leading edge technologies too. I love to be challenged and knew that the variety of work environments would give me both personal and professional development; I just needed to convince my Grandmother!”

Judges chose him as the overall winner because he has become a real role model within the company and his community. During 2018 he successfully mentored nine school and college students alongside his work and studies.

Ahmed commented: “The apprenticeship has enabled me to improve my personal qualities, to become a more well-rounded individual, not simply from an occupational perspective. BAE Systems has helped me to become socially conscious, participating in activities that go beyond my day-to-day work life. I strongly believe a person should wake up in the morning with two feet on the ground and feel that they are making a difference to someone’s life.”

Read about other apprentices in our sectors – updated throughout National Apprenticeship Week. 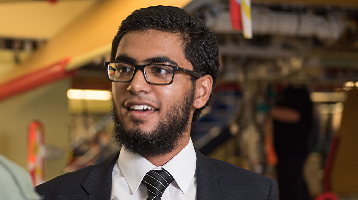