This morning the Labour Leader Jeremy Corbyn launched the party’s 2019 manifesto in Birmingham with his Shadow Cabinet. The manifesto itself has long promised to be one to ‘transform’ the UK and includes new policy proposals that Labour would take forward should they form the next Government.

We are pleased to see the Labour Party committing to produce a White Paper for a Defence Industrial Strategy which will also include a National Ship Building Strategy. ADS has been calling on all parties to prioritise an industrial strategy for defence which drives UK prosperity and enhances our national security.

The Labour Party also affirmed its commitment to renewing the Trident nuclear deterrent and committed to spending at least 2% of GDP on defence as set out by NATO. Labour also made an overarching commitment to procurement that supports the UK defence sector and the wider SME community.

The manifesto confirms Labour’s position to hold a second EU referendum in the first six months of Labour Government coming into power. This referendum choice would be between remaining a member of the EU or leaving the EU with a Labour negotiated deal.

The party said today that they would seek a permanent UK-wide customs union, close alignment with the Single Market, continued participation in EU agencies and funding programmes and clear commitments on future security arrangements. Frictionless trade, regulatory alignment and continued participation in the European Aviation Safety Agency and R&D programmes are key priorities for ADS members.

Labour’s promised ‘Green New Deal’ was a prominent feature of the manifesto with the overarching aim of achieving the substantial majority of the UK’s emission reductions by 2030. Labour’s vision is to create an ‘innovation nation’ with a target of 3% of GDP to be spent on research and development by 2030.

The manifesto also covers a lot of ground on workers’ rights introducing policies on giving employees shares in listed companies and spaces for worker-directors on boards.

You can find a two-page summary of the Labour manifesto below, read about ADS’ election priorities here and access the full document on the Labour website here. 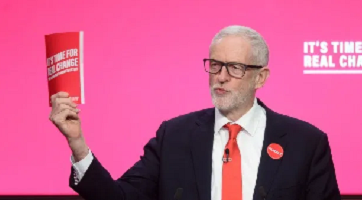