A sectoral approach to the Customs Union already exists

We don’t know what assurances on Brexit the Government gave Nissan, and in that vacuum we’ve had some speculation that Brexit could mean a sectoral approach to the Customs Union.

But what would a sectoral approach look like? And is it even possible?

While he thinks sectoral membership of the Single Market might be possible, because it’s relatively easy to define a sector based on output, Martin Sandbu at the FT thinks it’s more complicated for the Customs Union. As he wrote in the FT’s Free Lunch (£) last Tuesday:

“Sectoral membership of the customs union is a lot harder to imagine. The idea would be to keep whole supply chains intact and unobstructed by customs borders. But a supply chain is not defined by product codes, but by each product’s intended use. So how is one to establish that a given computer chip, lightbulb, strip of leather, or chemical coating is intended for use in auto manufacturing rather than another supply chain? Whatever the answer, it is hard to see how it involves less red tape and trade friction.”

Well, the EU already provides sector-based rules within the Customs Union. It does this through Inward Processing Relief (IPR) which suspends any duties liable for parts imported from non-EU markets and destined for re-export. The simple idea behind IPR is to remove the competitive disadvantage a company might face by import duties that are likely to feed through to higher export prices.

There are two mechanisms through which the customs duties can be suspended for the aerospace sector:

A sectoral approach is already baked into the EU’s (and so the UK’s) customs procedures. Technically, the UK can carry this on post-Brexit. Whether we will or not is an issue of politics rather than the technicalities of customs arrangements for long and diverse global supply chains. 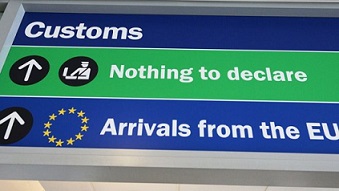