An innovative sector: Aerospace in Parliament

This week ADS along with the AGP and the All Party Parliamentary Group for Aerospace hosted an Aerospace in Parliament event in Westminster to show MPs the value of the UK Aerospace Sector.

More than 50 MPs and Peers attended throughout the event to discuss the priority themes for the aerospace sector over the coming year ahead of next week’s Paris Airshow. Companies such as Airbus, Aeromet, Rolls-Royce, Thales and GKN showcased alongside the Aerospace Technology Institute their work on a number of important issues for the sector.

MPs at the event heard about the Future Flight initiative, part of the Aerospace Sector Deal, which focuses on harnessing opportunities for the UK around electric and autonomous aircraft, urban mobility and the digitalisation of aviation.

They also heard about the work of the Aerospace Technology Institute, demonstrating their value in the aerospace innovation landscape and how its funding and collaboration opportunities has brought investment to the UK. A focus on high-value design also featured as the UK seeks to remain globally competitive, utilising a UK knowledge and skills base around digitally-enabled design and systems engineering.

The UK aerospace sector supports more than 111,000 highly skilled direct jobs in the United Kingdom including more than 3,800 apprenticeships. The sector is continuing to invest in these high-skilled jobs and R&D, contributing to UK prosperity.

The UK’s aerospace sector is committed to delivering more efficient and greener aircraft which are exported around the globe. Already demonstrating this, each new generation of aircraft produced is on average 20% more fuel efficient than its predecessor, and since 2005 the UK aerospace sector has spent £22bn on green R&D. ADS recently published a blog and fact sheet on climate change which you can read here.

“The Aerospace in Parliament event at the House of Commons provided a valuable opportunity for to discuss with Parliamentarians the work being achieved through initiatives such as the Aerospace Technology Institute and the Aerospace Sector Deal. The UK’s aerospace industry is an important success story, so we must work hard to maintain global competitiveness and retain skills here in the UK.” 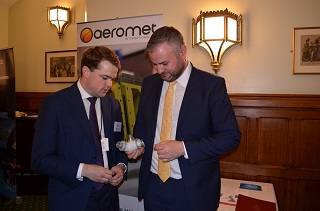