Farnborough International Airshow 2022 signified the revival of the aerospace, defence, and space industries, with new partnerships forged, contracts unveiled, commitments made and tens of thousands of professionals gathering to reconnect across the sector.

Setting the course of the industry for decades to come, sustainability, net-zero, advanced air mobility and space were the leading topics for exhibitors and attendees at the event, which took place 18-22 July, highlighting the industry’s dedication to driving positive change and building a more efficient, greener future.

The Airshow was opened on Monday by Prime Minister Boris Johnson, who welcomed global leaders from the aerospace and aviation industries to Farnborough, UK. Throughout the week 17 Ministers attended the Airshow alongside more than 30 Members of Parliament from across Government.

A strong backlog of aircraft and engine orders, billion-dollar global partnerships and contracts across the aerospace, space and defence supply chains were revealed by globally recognised leaders, such as Airbus, Boeing, Rolls-Royce, EasyJet and Embraer.

Airbus and Boeing announced deals between them worth $4.5bn to the UK at current programs and prices with 277 confirmed Aircraft orders and a further 81 options.

The deals, discussions and conversations at the Airshow demonstrated that across the sectors, there is clear recovery following the global pandemic. Announcements by the Prime Minister and senior cabinet Ministers on the first days of the show included the Jet Zero Strategy, the Aerospace Growth Partnership Destination Net Zero Strategy and new Future Combat Air Strategy, accelerating the UK’s leading position within the global aerospace arena.

Opened with a virtual message from HRH The Prince of Wales, the inaugural Aerospace Global Forum showcased the demand for collaboration within the industry and the wider ecosystem, providing a panoramic look at the disruptive and existential challenges of the 21st Century and actionable steps to a cleaner, more efficient generation of aerospace.

On Friday, Pioneers of Tomorrow took place and saw thousands of young people attend the show to learn more about the exciting and fascinating careers available in the UK aerospace, defence, security and space industries.

“Farnborough International Airshow 2022 has returned bigger and better than before. It’s been fantastic to see increased and renewed confidence in the global aerospace industry as sustained recovery from the pandemic continues.

“Total deals on aircraft made across the show, including firm, options and commitments on aircraft, including business and regional jets, comes to $50.8 bn which is a positive boost for the industry. There is a clear demand for newer, greener and fuel-efficient aircraft alongside increasing market recovery as the sector looks to accelerate progress towards net zero by 2050.

“The Airshow has highlighted numerous opportunities for UK businesses in areas such as sustainability and advanced air mobility. We will work with our members to maximise these opportunities many of which demand innovation and also collaboration between Government and industry both in the UK and abroad.”

“Farnborough International Airshow has cemented its position as the place to have important conversations about the future of aerospace. As a catalyst for pioneering innovation, we have demonstrated that the industry is setting out clear, ambitious plans and there is a new-found optimism for the future, made possible through strong strategies and collaboration. I look forward to seeing the innovation and pioneering partnerships established at the event between exhibitors and leaders continue to flourish”. 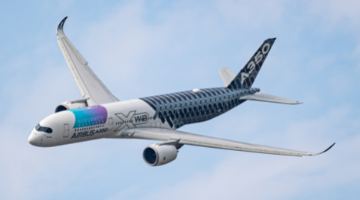