Posted on February 4, 2020 by Heather Gilchrist

Michael’s journey began at Thales at 16, following his Apprentice Assessment Centre. Joining Thales straight from school, he commenced his studies at Bridgwater and Taunton College on an Advanced Apprenticeship in Engineering. He was assigned to the Maritime Mine Counter Measures project so that he could apply his learning into the workplace and to develop his skills in Through Life Support Engineering. He completed his first apprenticeship in record speed in just over 12 months (a programme that normally takes three years to gain). He then moved on to a Higher Apprenticeship completing his Higher National Certificate and was promoted to Supportability Engineer.

Not one for standing still, Michael took the initiative to research his next steps, sourcing a new apprenticeship programme at MSc level in Through Life Engineering and has now commenced his studies on a Masters with Cranfield University, which is even more remarkable when you consider he is only just 19 years of age. Michael’s aim is to complete his course and to work towards Chartered Engineer status with the IET.

Last year, Michael was a winner in the South West Regional Apprenticeship Awards in the category of Higher Apprentice, which had an incredible 450 nominations truly reflecting his hard work and great talent.

Not only is Michael a remarkable employee for Thales, he is also an active member of the Apprentice Ambassador Network, who aim to spearhead the drive to engage employers and young people to commit to apprenticeships across the UK.

Read our other blogs on National Apprenticeship Week 2020. 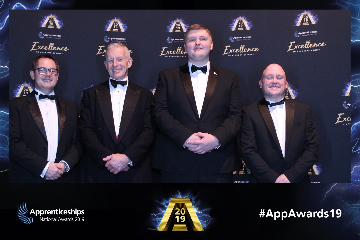