In the first of 3 weekly guest blogs, Doug Farren from the U.S. Aerospace Industries Association blogs on the F-35 debut at Farnborough and the importance of global partnerships.

The upcoming Royal International Air Tattoo (RIAT) and Farnborough International Air Show will mark the international air and trade show debut for Lockheed Martin’s F-35 Lightning II. Its advanced stealth technology, fully-fused sensor system, and network-enabled operations, coupled with the speed and maneuverability typical of a 5th generation fighter aircraft, make the F-35 the most advanced multirole fighter jet ever built. This multirole as well as multi-variant capability will ensure that the operators of the F-35 have the ability to execute the complex missions of today’s battlespace that in the past have typically required different, more specialized aircraft. The program is also a testament to the importance of international cooperation, with nine partner countries joining the United States to share in development and manufacturing costs. This global participation has proven critical in making the program a reality, and the F-35 is truly a global partnership.

As the only Level 1 partner nation, the United Kingdom has played an integral role in the F-35 program dating back to the 1995 memorandum of understanding between the UK and U.S. governments on the Joint Strike Fighter program. The Royal Air Force and Royal Navy will take delivery of 138 F-35B variants for short takeoff/vertical landing and they will serve as the core aircraft of the UK’s current and future aircraft carrier fleet. Just as important is the F-35 program’s contribution to the UK’s aerospace industrial base, with 15% of each aircraft being built by British industry. In addition to principal UK partner BAE Systems, British companies such as Cobham, GKN and Rolls-Royce are responsible for manufacturing key systems for the aircraft. In all there are more than 100 UK-based suppliers contributing to the F-35 and roughly 24,000 high-tech manufacturing jobs will be created in the UK as a result of its participation in the program.

The global nature of the F-35 program is emblematic of the continuing evolution of U.S. security cooperation in Europe and worldwide. Building partner capacity has increasingly become a cornerstone of U.S. foreign and national security policy. In 2015 the Defense Security Cooperation Agency – the U.S. government agency responsible for the development and execution of security cooperation programs – announced sales totaling more than $47 billion. These sales have helped our partners and allies from Europe to Asia and the Middle East increase their capability and capacity to counter the Islamic State, an aggressive and expanding Russia, and other state and non-state actors.

In the spirit of the special relationship between the two countries, the UK has consistently been one of the United States’ strongest partners in security cooperation. In addition to its planned procurement of F-35Bs, the UK purchased fifty AH-64E Apache attack helicopters in 2015 and is currently in the final stages of evaluating the purchase of eight P-8A Poseidon aircraft to upgrade its maritime surveillance fleet. These platforms offer the UK both increased capability and increased interoperability with U.S. forces, as both countries operate together to stop threats to global stability in Europe, the Middle East and other regions.

The security cooperation relationship between the United States and the UK is vital to protecting international security, and the UK’s participation in the F-35 program and procurement of other critical platforms and systems will ensure this relationship continues to remain strong. The Aerospace Industries Association and our member companies look forward to seeing the F-35 make its debut in front of an international audience at RIAT and Farnborough, and to celebrating the special global partnership between the United Kingdom and the United States. 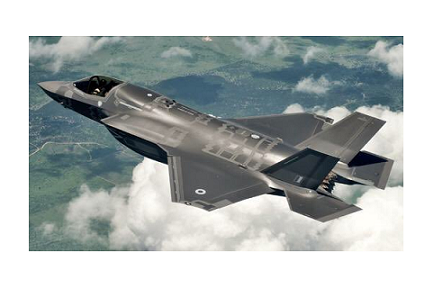