Sustainability and partnerships the hot topic as the Farnborough Airshow returns

A lot has changed in the four years since the previous edition of the Farnborough Airshow. Despite the four year hiatus, however, the return of the UK’s premier trade show delivered on the promise of the first major global Airshow since the pandemic. With deals totalling $50bn, the buzz was well and truly back for an industry looking forward to a growth year in 2022.

But around all the announcements of orders and deals, there was a clear, consistent underlying theme to the conversation at the 2022 Airshow – sustainability and an industry ready to band together and form partnerships with each other and with Government and regulators to drive cleaner flight.

The UK’s positive approach to sustainability took centre stage early on, with the launch of the much-anticipated Jet Zero Strategy on the Tuesday morning. This critical moment for industry – the culmination of more than a year of engagement and consultation between government and the sector – charts the UK’s path to reaching net zero aviation by 2050. Recognising the scale of the challenge and launching an ambition call for action across the aviation ecosystem, the Jet Zero Strategy is a clear framework through which to progress the journey towards net zero. A focus on zero emission flight, sustainable aviation fuels, system efficiencies and international leadership all set the UK up as a world leader, with the Jet Zero Strategy among the first of its type globally.

But it wasn’t just the UK that set out its stall for the decarbonisation of aviation. The World Economic Forum’s Target True Zero initiative released its first report, Unlocking Sustainable Battery and Hydrogen-Powered Flight, bringing together industry and stakeholders from around the world to study the impact that new technologies can have on decarbonising global aviation. At the same time, there was encouraging news coming out of Montreal where high-level talks at ICAO led to an agreement of a goal of net-zero carbon by 2050 – welcome news that fittingly complemented the hot topics at the Farnborough Airshow.

While the reports, commitments and conversations coming out of the Airshow were positive, ambitious and optimistic, the real promise arising from the Airshow is the role that industry partnerships will play in reaching ambitious climate goals. No single stakeholder can achieve net zero alone, and so the partnerships on display are a very positive sign, from the Aerospace Growth Partnership’s Destination Net Zero strategy announced alongside the Jet Zero strategy, to the announcement of a collaboration between Airbus and CFM (itself a partnership between GE Aerospace and Safran) to demonstrate and test open-fan architecture.

There is a lot of optimism coming out of the Farnborough Airshow for the future – a positive orderbook and the return of in-person air shows. This is especially true when it comes to sustainability. It is a daunting challenge, no doubt, but through collaboration, investment and ambition, the Farnborough Airshow 2022 served as a clear reminder that aerospace is an industry dedicated to make net zero a reality. 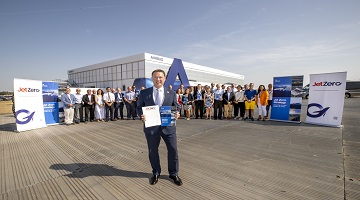