Representing their school, six students from King Edward’s School, Bath were crowned national champions of the UK Youth Rocketry Challenge 2021 after they competed in a national fly-off competing against teams from across the UK, their rocket flying 815 feet in 43.9 seconds.

To win the final Team Vesuvius met the 2021 mission requirements which change each year. This year’s competition required each team to design, build and launch a model rocket, with the payload of one raw egg – representing the astronaut.

Each team needed to get closest to at least 800 feet in altitude within a goal timeframe of 40-43 seconds. The teams also presented to the judges on the unique design and build of their rockets, reflecting on the challenges and findings during the test phases, as well as their experience of the UK Youth Rocketry Challenge (UK Roc). Following a close fly-off Team Icarus from Epsom College came third, Team NHASA from North Halifax Grammar School came second with Team Vesuvius crowned the national winners of the UK Youth Rocketry Challenge.

"We have really enjoyed applying science, technology, engineering and maths to a real project as a team. We have learnt how to work best as a team and obviously a lot about rockets. We loved the opportunity to fly our rocket at the finals and are very pleased we maintained our standard from the qualifying flights. Best of luck to next year's KES rocketeers!"

“My sincere congratulations to Team Vesuvius from King Edward’s School, your ingenious rocket design has left the other teams on the launchpad. Your school, friends and families should be incredibly proud of your outstanding performance on a national stage, particularly against the backdrop of a global pandemic which presented a further level of challenge which you adapted to and triumphed as the national champions of the UK Youth Rocketry Challenge – congratulations!

“The UK Youth Rocketry Challenge is a fantastic example of how industry can support and encourage young people into fantastic and fascinating careers in aerospace. I would like to also thank our sponsor Lockheed Martin for their support of the competition and encourage anyone aged 11-18 who has an interest in STEM to participate in the Challenge next year.”

“As Lockheed Martin heads towards delivering the UK’s first vertical satellite launch next year, initiatives like the ADS UK Youth Rocketry Challenge will inspire young people to consider careers in science, technology, engineering or maths and truly connect them to a pathway in becoming the next generation of space scientists and engineers.

“This is an exciting time to be part of putting the UK at the forefront of space capability and this next generation will be integral to the success and longevity of it.” 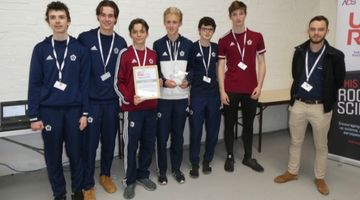