The winner of the eleventh annual ADS Security Innovation Award has been announced as Symetrica for their Discovery RPM – Radiation Portal Monitors.

The Award was presented to Heddwyn Davies, CEO of Symetrica by the Security Minister, the Rt Hon John Hayes MP at a ceremony which took place at Farnborough.

Dutch Customs deploys Symetrica’s RPM at the Maasvlakte 2 extension to Rotterdam Port through the prime contractor, L3 Security Detection Systems. The RPM is built on Symetrica’s Discovery Technology®, deployed by the U.S. Department of Homeland Security in the Smiths Detection RadSeeker™.

On being presented with the Award, Heddwyn Davies said: "Symetrica would like to thank the Security Minister and the ‘ADS Security Innovation Award’ judges for this important honour. This Award recognises that Symetrica’s Radiation Portal Monitors have delivered a step change in effectiveness for advanced end users by delivering robust performance in challenging real world deployments.

“A common goal for Homeland Security Departments around the world – including the US and UK – is to improve capability and reduce cost. Symetrica’s technology protects national security while maintaining the flow of commerce and reducing operational cost by efficiently detecting, identifying and verifying radioactive threats.”

The annual ADS Security Innovation Award aims to identify key innovations across the UK’s security sector, recognising capabilities that provide new solutions for preventing, responding to, reducing the impact of, or investigating risks.

Paul Everitt, Chief Executive of ADS Group said: “Our Awards recognise innovation across the security sector and the strategic contribution it makes to national safety and prosperity. My congratulations to Symetrica; not only does their Discovery RPM provide highly efficient and effective detection of radiation but it helps sustains high value, long-term jobs in the UK”

“The UK’s security sector is an international leader in developing solutions to public safety and security challenges. Annual turnover has more than doubled in the last five years to £8.5bn, £3.4bn of which is generated through exports, meanwhile productivity is 40 per cent higher than the national average.”

More than 40 companies entered the 2016 Awards, the highest number of applicants to date. In addition to the winner, there was one runner-up and a two named highly commended.

3rd Forensic Ltd for its Forensic Image Linking and Management System (FILM) Mk II and Mk III. This is an enhancement to its Mk I system which received an Innovation Award in 2013.

Centered around a tailor-made database and search engine, FILM is a uniquely effective forensic image management tool for use with CCTV images and body-worn video footage; enabling faster and more cost effective identification of suspects.  FILM has contributed to more than 13,000 identifications, and a rise in the guilty plea rate from an average of 63% to 84% in FILM-assisted prosecutions.

Create Intelligence for Chorus, the sector-leading application which enables analysts to produce courtroom-standard briefing documents from up to 10 million lines of data in minutes.

Chorus highlights previously hidden connections and by so doing opens up new lines of enquiry, putting actionable intelligence in the hands of investigators fast. It is designed to empower analysts in the face of increasingly overwhelming volumes of data and has already been chosen by nearly 75% of UK police forces.

This approach as resulted in enhanced national security against potential airborne threats; increased energy generating capability, and reduced C02 generation – all at no cost to the MOD. 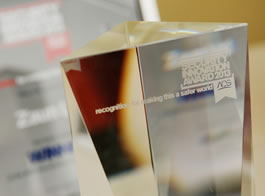