Today, aspiring astronauts, rocket scientists and engineers from across the South East of the United Kingdom are competing in the UK’s largest youth rocketry competition (UK ROC).

17 teams comprising of 73 11-18-year-olds from a range of schools, colleges, youth groups are launching model rockets and competing for a place in this year’s National final.

The regional event is being held at Stow Maries Great War Aerodrome, Essex, and teams from across the region will go head-to-head in a battle to be crowned regional leaders and secure a place in the national final and become National Champions.

The National Champions will win an all-expenses paid trip, to represent the UK in a “fly off” against international teams from the USA, Japan, and France at the Farnborough International Airshow in July 2022.

UK ROC involves the design, build, and launch of a model rocket, with the payload of two raw eggs representing the astronauts. At the regional and national events, the flight duration goal is 44 seconds, and the ‘astronauts’ must remain intact throughout the launch and landing. Rules governing the competition are altered each year to encourage innovative thinking amongst participants and ensures previous designs can’t be repeated.

“It is crucial that we continue to inspire and attract the future workforce to industries like Space and Aviation, and STEM initiatives such as the UK Youth Rocketry challenge play a crucial role in encouraging young people to learn more about the sectors.

“The 73 11-18-year-olds competing from the South East are learning about the skills needed for fascinating and rewarding careers in the future. I wish all teams competing the best of luck and look forward to following the teams’ progress throughout the competition.”

“Stow Maries Great War Aerodrome is committed to driving the Science, Technology, Engineering and Mathematics (STEM) agenda – as well as strengthening the links between our museum and the engineers of tomorrow.

As part of this ongoing journey, we are always overjoyed to have ADS and the UK Rocketry team on site, leading the way. It’s always lots of fun! The schools taking part work so hard and it’s great to see what can be achieved with the right support.” 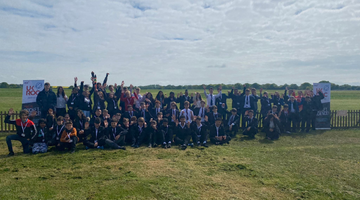