Home » News » Industry & Member News
Posted on 26 July, 2019 by Member News
UK scientists are leading an international project to build the worlds first space rock mining devices which use bacteria to recover minerals from rocks on the Moon and Mars.


Astronauts will test the devices on board the International Space Station, following the successful launch of the SpaceX Falcon 9 rocket last night (at 23:01 BST, Thursday 25 July) from NASA’s Kennedy Space Centre at Cape Canaveral.

Mining in space could open up a new frontier in space exploration by giving astronauts the resources they need for long periods in space, whether on the Moon, Mars or asteroids.

Scientists based at the University of Edinburgh have developed 18 matchbox-sized prototypes, called biomining reactors, to test how low gravity affects the ability of bacteria to extract materials such as iron, calcium and magnesium from space rocks.

Eighteen of the devices will undergo tests on the space station, which involve exposing basalt rock to the bacteria before they are returned to Earth to be analysed in a lab.

Professor Charles Cockell, of the University of Edinburgh’s School of Physics and Astronomy, who is leading the project, said: "This experiment will give us new fundamental insights into the behaviour of microbes in space, their applications in space exploration and how they might be used more effectively on Earth in all the myriad way that microbes affect our lives."

The ‘BioRock’ experiment is led by the University of Edinburgh, with the European Space Agency and the UK Space Agency, and is funded by the Science and Technology Facilities Council, part of UKRI.

It is the second UK-led experiment to take place on the International Space Station, after the ‘Worms in Space’ experiment launched in December 2018, and involves researchers from across Europe, including Belgium, Denmark, Germany, the Netherlands and Italy.

The experiment will also study how microbes grow and form layers – known as biofilms – on natural surfaces in space.

The findings could have numerous applications on Earth, including the recovery of metals from ores and the use of biofilms in industry and medicine.

Dr Rosa Santomartino, of the University of Edinburgh’s School of Physics and Astronomy, who is leading the study of the rocks when they return, said: "Microbes are everywhere and this experiment is giving us new ideas about how they grow on surfaces and how we might use them to explore space." 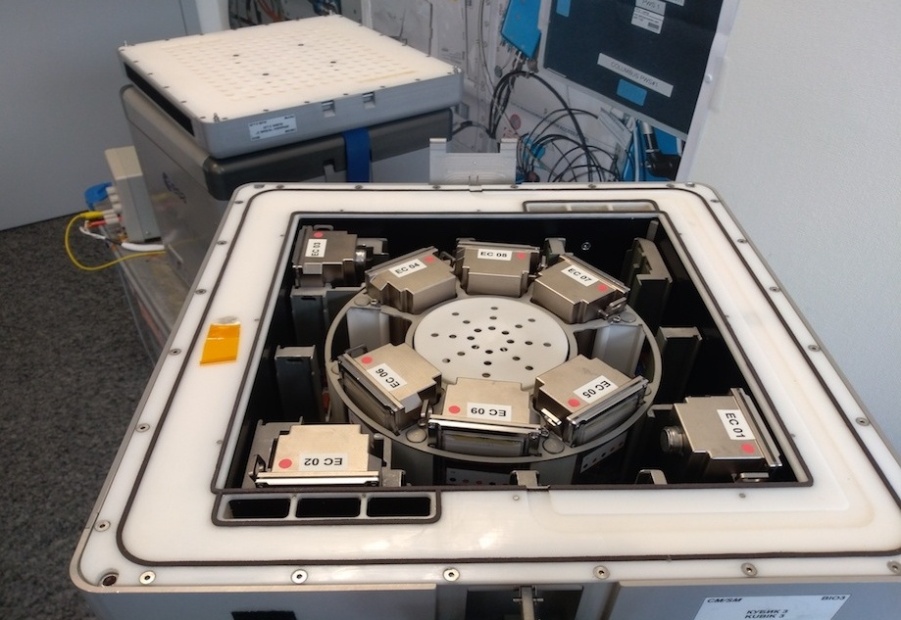