Virgin Orbit’s 747 carrier aircraft Cosmic Girl took off from Mojave Air and Space Port yesterday afternoon at approximately 1:39 PM PST/09:39 PM UTC and flew to a launch site over the Pacific Ocean, about 50 miles south of the Channel Islands.

After a smooth release from the aircraft, the LauncherOne rocket ignited and propelled itself towards space, ultimately deploying its payload into a precise target orbit approximately 500km above the Earth’s surface at 45 degrees inclination. This is the first time that anyone has reached this orbit from the West Coast.

The launch was the company’s third successful flight, occurring less than one year from its first mission. Virgin Orbit has now successfully delivered commercial, government, international, and national security satellites to space, including new Above the Clouds customer Spire Global, Inc., and first ever repeat customers: the US Department of Defense Space Test Program and Polish company SatRevolution. This launch was awarded to Virgin Orbit through its subsidiary VOX Space by the DoD’s Defense Innovation Unit (DIU) as part of the DoD Space Test Program’s (STP) Rapid Agile Launch (RALI) Initiative.

The satellites launched on the company’s latest mission include experiments in space-based communications, space debris detection and in-space navigation and propulsion, as well as satellites that will serve the global agricultural sector. The launch brings the total number of satellites launched by Virgin Orbit to 26.

Because of the unique air-launch system Virgin Orbit has developed, the Above the Clouds mission was launched in an orbit never before directly accessible from the West Coast of the Americas. Rather than launching from a fixed pad on the ground, Virgin Orbit conducts its launches from under the wing of a modified 747 aircraft and by flying the aircraft further out over the ocean, the company was able to launch on a trajectory no ground-launch rocket could have achieved. That direct injection into the target orbit saved the satellites onboard this mission months of time and kilograms of fuel they might have otherwise spent correcting their orbit from what a landlocked launch site could provide them.

Virgin Orbit CEO Dan Hart said: “Our customers are starting to hear back from their satellites that are checking in from orbit — and for us, that’s what success looks like. It’s a thrill for our team that this mission included our first repeat customers as well as our first ‘last minute ticket’ customers and reached an orbit that no one had ever reached from the West Coast before, all of which confirms the team’s ability to provide top tier launch service anywhere, anytime,” said

“On top of that, we flew through weather and a cloud layer that would have grounded any other launch I’ve worked on in my career, something only made possible by air-launch and our incredible team. We can say with confidence that in this new era of regular, frequent, successful missions, we can help our customers and partners use space technology to advance human knowledge and open space for good.

“This accomplishment today really shows the future of space launch capabilities, something that is of paramount importance to national security,” said VOX Space President Mark Baird, a retired US Air Force Brigadier General. “We have the ability to launch anywhere, anytime and unwarned, which allows us to customise the launches to serve a government’s mission and goals, allowing us to be better mission partners in their space operations.”

“What an unforgettable experience to watch the Virgin Orbit team complete another perfect mission to space. I could not be prouder of the work they are doing. I am beaming alongside them,” said Virgin Orbit founder Richard Branson. “We supported experimental, important work for our three happy customers today. I congratulate them and our wonderful team.”

Above the Clouds is named after the fifth track on Gang Starr’s 1998 album Moment of Truth, featuring Inspectah Deck of Wu-Tang Clan. The record was released by Virgin Records in collaboration with Noo Trybe Records and is widely regarded as one of the greatest hip hop albums of all time.

Virgin Orbit operates one of the most flexible and responsive space launch systems ever built. Founded by Sir Richard Branson in 2017, the company began commercial service in 2021 and has already delivered commercial, civil, national security and international satellites into orbit. Virgin Orbit’s LauncherOne rockets are designed and manufactured in Long Beach, California and are air-launched from a modified 747- 400 carrier aircraft that allows Virgin Orbit to operate from locations all over the world in order to best serve each customer’s needs.

The UK Space Agency welcomed the news of the launch as they and Cornwall Council are supporting Virgin Orbit to launch satellites from Spaceport Cornwall, starting this summer, with the spaceport set to create 150 jobs in the local area.

One of the commercial satellites launched on the ‘Above the Clouds’ mission was manufactured in Scotland by Spire Global, a world-leading satellite company based in Glasgow. These satellites were shipped from Glasgow to California for the launch, which demonstrates the potential value to the UK satellite industry of having a new launch capability in the UK.

Spire Global’s ADLER-1 satellite is designed to help address the growing issue of space debris by gathering data about the environment in Low Earth Orbit.

UK Space Agency Deputy CEO Ian Annett said: "Congratulations to Virgin Orbit on another successful mission, which demonstrates the huge potential of innovative, air-launch technology to meet the needs of the modern satellite industry. Having an RAF pilot at the controls demonstrates the UK’s commitment to working closely with Virgin Orbit ahead of their first launch from Spaceport Cornwall later this year.

"The UK is home to some of the world’s leading satellite manufacturers, which currently ship their products overseas for launch. We are supporting them by fostering a new domestic launch market, with spaceports and launch operators providing services across the UK and catalysing investment from all over the world."

Unlike many rockets, Virgin Orbit’s Launcher One takes off horizontally, carried aloft by a modified Boeing 747 jet, named Cosmic Girl, which was flown by Flight Lieutenant Mathew Stannard, a Royal Air Force pilot on secondment with Virgin Orbit.

This was Virgin Orbit’s third commercial flight. In January 2021 the company put its first satellites into space, after launching from California’s Mojave desert.

Melissa Thorpe, Head of Spaceport Cornwall, said: "With another successful launch, our partners Virgin Orbit are proving a new, more sustainable way for satellites to access space. We are so excited to bring this technology to UK soil, and to demonstrate how we can launch responsibly, create amazing jobs and inspire the nation."

The UK Government’s National Space Strategy sets out how the UK will become the first country in Europe to launch satellites into orbit in 2022. Spaceport Cornwall is one of seven potential spaceport sites across the UK which will help to cement the UK’s role as a science superpower and help unleash a wave of innovation across the country. 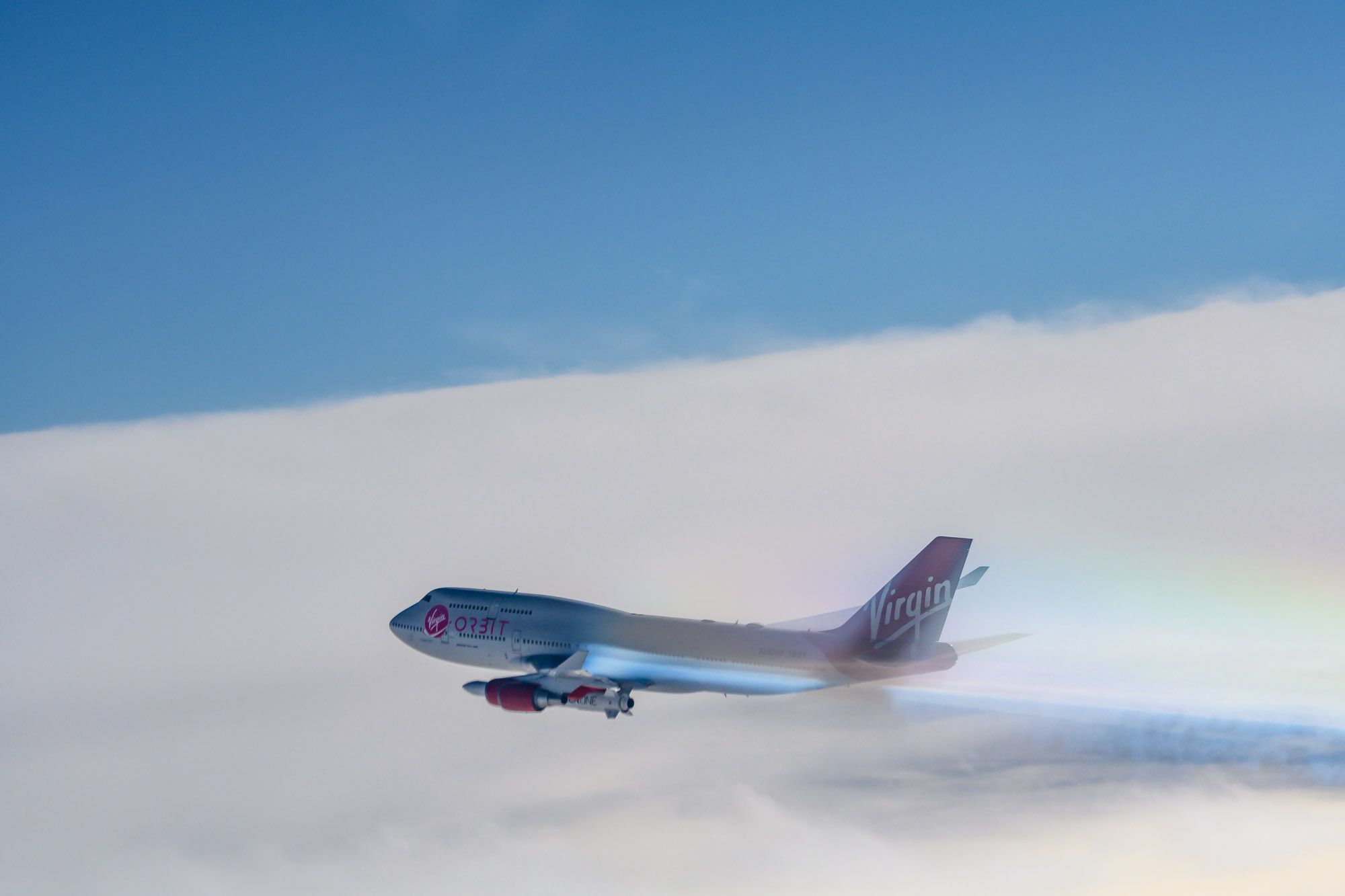