Home » News » Industry & Member News
Posted on 18 September, 2019 by Advance
Work is progressing on buildings that will be home to two US Air Force (USAF) F-35 squadrons at RAF Lakenheath in Suffolk


The base is due to welcome the first of the new aircraft in late 2021 and the buildings will house the latest training and maintenance technology to prepare both the aircraft and crews to deliver their missions effectively.

The Defence Infrastructure Organisation (DIO) awarded a contract worth £160 million to the Kier VolkerFitzpatrick joint venture in November to deliver critical infrastructure at the Suffolk airbase. Current work is part of a wider programme of work to support US Air Force operations in the UK, with more than US$1 billion expected to be invested in the UK over the next seven to 10 years.

The new facilities at RAF Lakenheath will accommodate approximately 1,200 additional personnel who are expected on the base as part of the arrival of two new F-35 squadrons.

Construction began in July with a groundbreaking ceremony at the base and work has been progressing with two important buildings taking shape.

The squadron operations building will include an Aircraft Maintenance Unit (AMU) with separate administration, amenity, lecture theatre and classroom areas.

There will be similar spaces for both squadrons, with accommodation for each mirrored on either side of the building.

To improve training in a variety of different operational scenarios, work has also started on the construction of a flight simulation facility to train the next generation of F35 pilots.

DIO USVF Programme Director, Keith Maddison, said: "We are pleased with the progress achieved at the base since the groundbreaking event. The site is changing and improving every day and it is exciting to see key buildings like the flight simulator and the maintenance unit beginning to take shape.

"We are proud to be playing a central role in preparing RAF Lakenheath to become the first permanent international site for US Air Force F-35s in Europe."

"By creating synergy in the training and development of our aircrew, maintainers, and support personnel, this shared space will ensure we’ll continue to be ready to secure the sovereign skies above."

Chris Evans, managing director of VolkerFitzpatrick’s Civils division, said: "It is great to see the significant progress which has already been made since we broke ground in July. Our teams are working collaboratively and efficiently to get the work done and I look forward to celebrating future milestones as the project progresses.

Managing Director Strategic Projects at Kier, James Hindes, said: "It is fantastic to see how the work on site has been progressing since the groundbreaking event in July. It is great to be working collaboratively with VolkerFitzpatrick, the DIO and the 48th Fighter Wing to deliver this key infrastructure to allow RAF Lakenheath to become the first permanent international site for US Air Force F-35s in Europe."

At the height of construction, it is expected that there will be up to 700 people on site supporting the programme. The investment will also provide wider benefits both to the project and to the local economy.

Construction materials from the demolished buildings have been reused on site for sub-base for car parks, roads and other hard standing areas. A concrete plant has also been built on site reducing carbon miles and traffic in the community.

DIO is also working closely with Forest Heath District Council and Kier VolkerFitzpatrick to ensure that the opportunities to create employment and training are maximised and that they last beyond the end of construction.

In the first six months of the project six apprentices were taken on and 22 new jobs were created. A ‘meet the buyers’ event was held recently for local companies to understand what work opportunities are available in the project. 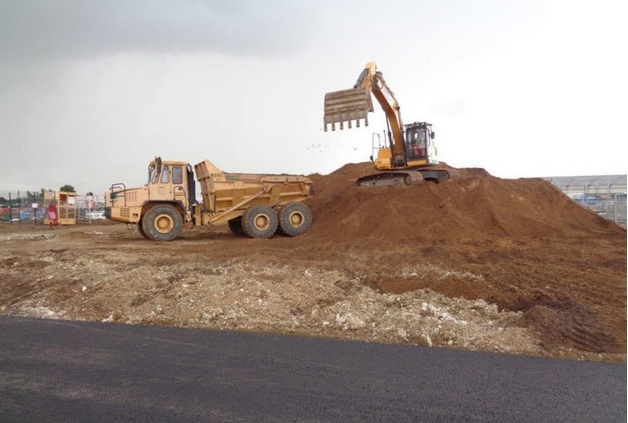