Standing by for the next cargo load: RVL Aviation’s latest fleet addition - a Saab 340B.
Courtesy RVL Aviation


This is the latest in a line of new fleet additions to the growing airline’s capability.

The first Saab joined RVL in January and the second arrived from Sweden in March, following its freighter conversion. Both aircraft have been leased through Miami-based Jetstream Aviation capital, in the USA, which specialises in commercially operated regional turboprop aircraft.

Dave Connor, RVL Managing Director, said: “Within a day of arriving with us the new aircraft was in service on a cargo flight to Italy, and there is an extensive schedule of operations in the pipeline for it including ad-hoc cargo charters. Not only does the new aircraft add vital capacity for us as the UK’s pandemic measures are starting to ease, it also provides a useful back-up capability now that we have two of the same aircraft in the fleet.”

“The whole RVL team is enormously excited about the new aircraft and the company’s future prospects now that the new aircraft have started operating. All staff have done a magnificent job to get the Saabs operational, including varying all our operating approvals in a very short time and in the most challenging of circumstances. It’s a huge success story for the business and the team.”

Additional pilots have been recruited to RVL’s flight operations to crew the new aircraft, increasing the airline’s flying staff by some 30%.

“All the new pilots come with experience of, and a background in, the operation of the Saab 340, which gives us the confidence and expertise to be able to launch operations quickly and efficiently,” said Head of Flight Operations and Chief Pilot Rich Baker. “Operationally the Saabs are a big step up for us. They require two crew at all times and, of course, they carry considerably more cargo than we dealt with previously. That we are up-to-speed without a pause or hiccup is a testament to the whole of RVL.”

Head of Commercial, David Lacy, said: “Our customers have been asking us for larger aircraft and we have delivered. Each of the 340s offers roughly four times the cargo volume and payload of our existing aircraft and we are now able to fly a larger payload much further than our previous fleet allowed us to. The Saab is an ideal aircraft for both our long-term cargo contracts and ad hoc missions. We are confident that they will be key to securing new business as the country recovers from Covid restrictions.”

For Ground Operations Manager Ross Titchiner the upscale in RVL’s cargo capacity has presented exciting new challenges for him and his experienced team. “It takes us to a new level. In operational terms we now have to think a little bit differently as to how we approach things,” said Ross. “A significant payload increase for RVL air cargo, compared to what we have previously been able to offer, is a massive positive.”

“We have upgraded and adapted our procedures, for example airfield slot management, and have developed better ways to work with our operational control and flight planning systems. It has been a complete change of mindset for the team to optimise to get the best from the new aircraft and what they can achieve operationally. And every team member has stepped up seamlessly. The experience level is growing. It’s exciting to be picking up a whole new skillset and thinking about heavier weight aircraft and what we can do with them as we grow.” 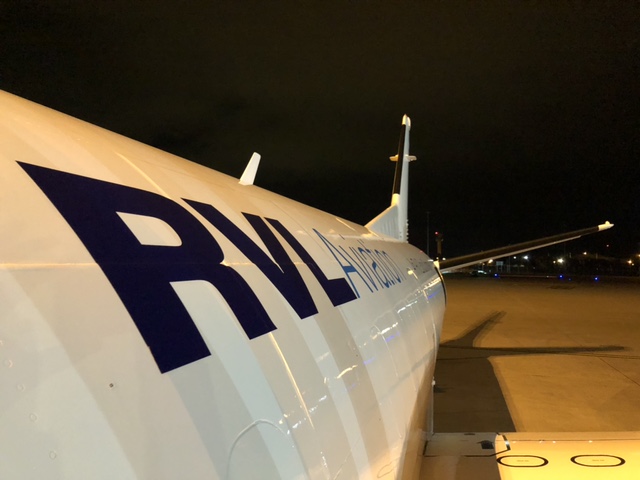