Home » News & Analysis » Industry & Member News
Posted on 16 April, 2021 by Advance
Loganair has announced a major step in connecting East Anglia with the South-West of England through the launch of a new air route between Norwich and Exeter, following an announcement that it will also be providing connections between Teesside International and Bristol, as well as City of Derry and Liverpool .


The service, which starts on 12th July, will operate a four flights per week service across the summer season on Monday, Wednesday, Friday and Sunday – moving to Monday and Friday flights from September onwards.

The 70-minute flight on Loganair’s 49-seat Embraer 145 jets  represents a much more convenient way to travel than rail connections via London or an exhausting 320-mile road journey, particularly difficult on packed roads during the summer season.

The service links existing Loganair destinations. Norwich is already served from Aberdeen, Edinburgh and Jersey, and Exeter from Edinburgh, Glasgow and Newcastle.

The new service adds to the restoration of domestic connectivity from Exeter lost through the collapse of Flybe - between the four routes now flown by Loganair, those flown by its partner airline Blue Islands to Manchester and Jersey, and other airlines’ services to Belfast and Guernsey.

Of 46 UK domestic routes operated by Flybe at the time of its demise, 42 will be flown this summer by Loganair and six other airlines, comprehensively and successfully safeguarding the UK’s domestic connectivity.

Loganair chief executive Jonathan Hinkles said: “We are very pleased to expand our commitment to Norwich and Exeter with this direct service, connecting two important UK business and leisure locations.   We’re sure this new connection will be warmly welcomed by customers travelling for work reasons and by those - just as soon as they can – travelling to visit friends and family.

“The need for domestic connectivity has been clearly recognised by the UK Government with its stated intention to reform Air Passenger Duty on domestic flights. There is no doubt the high level of APD has historically rendered such links as Norwich to Exeter economically difficult to sustain.

“The fact that 42 of Flybe’s 46 lost domestic routes have now been restored also shows the resilience and the importance of supporting the UK’s domestic airlines and this ‘team effort’ across the industry is something of which we should we all be proud.”

Exeter Airport operations director Stephen Wiltshire said: “It’s marvellous that Loganair is re-establishing the link between Exeter and Norwich, which is a key route for business, tourism and reconnecting family and friends kept apart by the pandemic.

“Importantly, this launch fills another gap left by the collapse of Flybe, with almost every domestic destination from Exeter now being restored by Loganair and other carriers over the coming months.

“In launching these routes, Loganair is putting its trust in the UK Government to deliver on its promise to reduce domestic Air Passenger Duty which is critical to the recovery and sustainability of domestic flying.”

Loganair has also taken the first step in connecting the North-East with the South-West of England through the launch of a new air route between Teesside International and Bristol. It will become the airline’s seventh route at Teesside.

It is also safeguarding the popular air link between City of Derry Airport and Liverpool, following Ryanair’s recent decision to step back from the route.

Both services start on 24th May.

Teesside - Bristol:
The 70-minute flight will leave Teesside on weekdays at 14.25, with the return flight departing from Bristol 16.05.

Loganair returned to Teesside – under its new ownership – on 1st February after an absence of over two years. In a short time, the airline is already well established on the key route to Aberdeen; has added London Heathrow flights and is introducing flights from Teesside to Belfast City, Dublin, Jersey and Cornwall Airport Newquay over the coming weeks.

Loganair Chief Executive Jonathan Hinkles said: “We are very pleased to expand our commitment to Teesside International with this direct service to Bristol, connecting two important UK business locations.   We’re sure that the new connection will be warmly welcomed by customers travelling for work reasons and by those - just as soon as they can – travelling to visit friends and family.

“Chancellor Rishi Sunak’s Budget speech was effusive in his praise of what is being achieved on Teesside, and the awarding of one of the eight English free ports to Teesside and the Treasury’s new economic campus to Darlington emphasises this is one of the UK’s areas of growing importance.

“Our Teesside to Heathrow service starts today (09.04.21) and these announcements mean we are already looking at increasing flights to London.”

Tees Valley Mayor Ben Houchen said: “This connection is great news for businesses across Teesside, Darlington and Hartlepool, as well as local people who are looking for a UK-based city break to a brilliant destination. I’m also looking forward to welcoming visitors from Bristol here and show them all we have to offer.

“Our partnership with Loganair is going from strength to strength despite the challenges posed by the coronavirus pandemic. This announcement is just the latest in a long line of good news as we increase routes and make the airport one that the people of Teesside can be proud of once again.”

Bristol Airport CEO Dave Lees said: “Frequent flights between Bristol and the North of England help foster strong links for business and tourism, which is why Loganair’s new Teesside service is such great news. Teesside is a convenient gateway from which to explore the North England, just as Bristol Airport is the ideal starting point for visitors to South West England and South Wales.”

Tim Bowles, West of England Mayor, said: “Creating better links with other parts of the UK will help strengthen our economy as we emerge from the pandemic and create more decent jobs for people here in the West of England. I’m pleased to see Bristol Airport continuing to expand its offer so that even more people see the opportunities for investment in our region.”

The new flights will be operated by Loganair’s dedicated team of pilots, cabin crew and engineers already based at City of Derry Airport (CODA), at which Loganair was the very first operator when the airport opened for business in April 1980. The basing of the 49-seat Embraer 145 regional jet at CODA already supports 15 direct jobs for pilots, cabin crew and engineers in the area.

This new route follows close on the heels of confirmation by the Department for Transport of continued funding for the City of Derry to Stansted PSO route.

In a further clear signal of its commitment to the airport, Loganair will also be increasing flights linking CODA with Glasgow from late June. Services will gear up from four days per week to daily as extra flights on Tuesday, Wednesday and Saturday are introduced to the timetable. The move will secure the long-standing airbridge between City of Derry and Scotland despite Ryanair’s decision to withdraw its flights from CODA to Edinburgh.

Loganair’s Chief Executive Jonathan Hinkles said: “Frequent air links are essential for so many aspects of working and family life, even as we work to re-build and recover from the Covid-19 pandemic.  Loganair already serves both City of Derry and Liverpool airports, and when the opportunity arose for us to connect these two important destinations in our network following another airline’s withdrawal, we were only too pleased to step in to safeguard these connections.

“Loganair’s ability to grow at City of Derry is in no small part thanks to the exemplary reputation for reliability and service established by our locally-based team. I’m most grateful to all of them for maintaining our London services without interruption over the difficult last 12 months.  It’s wonderful to be able to recognise their superb efforts today by re-doubling our commitment to City of Derry’s air links.”

Steve Frazer, Managing Director of City of Derry Airport, said: “We are pleased that Loganair have again shown their commitment to regional connectivity from the North West of NI. Increasing the frequency to seven days a week from the end of June will give maximum choice and flexibility to both business and leisure travellers.”

Paul Winfield, Director of Aviation Development at Liverpool John Lennon Airport, said: “This route is an important link between our two cities and their regions beyond, having already proved popular by travellers flying in both directions. As we plan ahead for a return to normality after the difficulties of the past year, domestic air travel is likely to recover sooner and this route will help travellers to once again be able to enjoy all that’s on offer from our two great regions.” 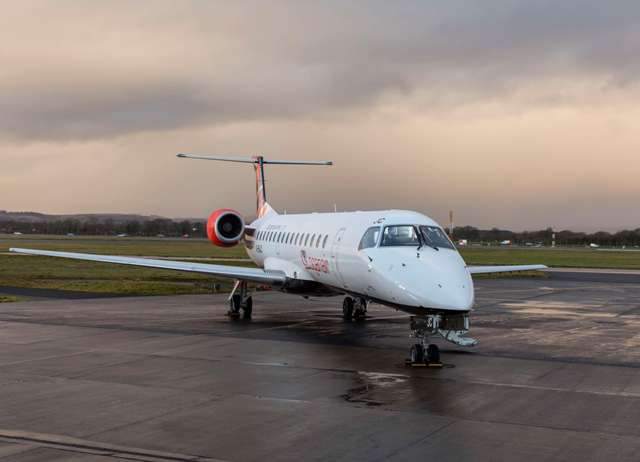