Home » News & Analysis » Industry & Member News
Posted on 1 December, 2021 by Advance
An autonomous electric shuttle will transport passengers around Harwell Science and Innovation Campus in Oxfordshire, for a trial funded by the UK Space Agency and the European Space Agency (ESA).

The new service is being trialled by Darwin Innovation Group, with support from the European Space Agency (ESA) and the UK Space Agency. An autonomous shuttle will transport passengers around Harwell Science and Innovation Campus in Oxfordshire, which is home to some of the UK’s most innovative companies and research organisations.

The shuttle, created by Navya, uses LiDAR sensors, cameras and ultrasound sensors to navigate safely around any obstacles. It also features a satellite (GNSS) antenna for positioning. There is no steering wheel but it does have safety controls, which will be managed by an on-board operator throughout the trial.

Darwin will maintain and monitor the service, tracking the shuttle’s location and gathering information about its operation as it travels. Telematics data will be transmitted from the shuttle in real time using Hispasat’s satellite communication channels and O2’s 4G and 5G networks.

Science Minister George Freeman said: "Until now autonomous vehicles have relied on terrestrial Wi-Fi which means they can struggle to operate in remote and rural areas. By unlocking the power of space and satellite technology, these new shuttles can stay connected all the time.

"Our National Space Strategy promises to put space technology at the heart of our efforts to make the UK a science and innovation superpower. Autonomous vehicle technology has huge applications in key industries and the UK is committed to lead in adoption as well as technological innovation."

This shuttle service will help demonstrate the potential of self-driving vehicles to operate in a real-world setting, serving as a step towards the wider use of this technology in the UK. Similar Navya shuttles have been used in an urban setting in Switzerland and have safely transported tens of thousands of passengers.

The shuttle, which is battery powered, shows that the future of public transportation can be green as well as autonomous. The potential to transport passengers while emitting zero carbon, if put in place more widely, could help the UK towards its emission targets.

The shuttle service has already created new jobs at the campus: shuttle safety operators and shuttle mechanics. The people working with the shuttle will be able to share their experience with technology colleges and help improve the available courses.

In addition to Darwin, Navya, ESA and UK Space Agency, a range of organisations have supported the new shuttle service. Mobile operator O2 and satellite operator Hispasat have aided Darwin in its research into connectivity, and the shuttle will make use of their networks as it travels around the campus. O2 also provides added investment to Darwin, as well as supporting with patent development. Harwell Science Campus and STFC are hosting the service and AWS is providing storage for the data produced by the shuttle.

The shuttle is insured by Aviva, which will use the trial and resulting data to better understand the evolving mobility market. With this information, Aviva will be able to create innovative insurance products to cater for this fast-changing market, including autonomous vehicles and associated technologies.

The autonomous shuttle service operates at Harwell Science Campus during weekdays, morning to evening. It travels two routes, one along Fermi Avenue and one along Eighth Avenue, with the ESA building being the central stop for both routes. There is no cost to ride the shuttle, which is currently available to campus pass-holders and registered guests of pass-holders.

Daniela Petrovic, Delivery Director at Darwin, said: "We’re thrilled to play a part in demonstrating the real-world potential of autonomous vehicles. Self-driving cars are no longer theoretical, and we believe that CAV trials can help move the UK towards greener, more efficient and more accessible modes of transport."

Sergio Budkin, Director of Market Development at Virgin Media O2, said: "This is another exciting milestone in making connected autonomous vehicles a reality, from concept to deployment on our roads. We’re proud to not only be utilising our award-winning network, but also creating the app for real-time tracking, providing another innovative 4G & 5G use case that’s making a difference to society and the way we live."

José Luis Serrano, Head of Innovation at Hispasat, said: "We believe this trial will be a major step forward in combining satellite technology with 4G and 5G environments to ensure that autonomous driving can be performed reliably and resiliently regardless of geographic location."

Elodie Viau, ESA’s Director of Telecommunications and Integrated Applications, said: "5G is set to transform society. For this to happen, communications networks in space have to be integrated with terrestrial ones. ESA is excited to champion the Harwell shuttle service, a project that will both showcase the reliable, instant connectivity delivered by converged space and ground telecommunications networks and bring low-emissions, autonomous vehicles to the roads."

Stuart Grant, Chief Executive at Harwell Science Campus, said: "At Harwell we’ve created a scale-up ecosystem that promotes collaboration, multidisciplinary innovation and the creation of smart technology. We’re delighted to be able to support campus-based Darwin with the launch and operation of their next-generation autonomous shuttle. The Harwell shuttle will transport over 6,000 employees around the campus, showcasing the future of travel and urban mobility."

Nick Amin, Chief Operating Officer at Aviva, said: "This real-world trial is an important development that will help advance the potential and use of autonomous vehicles on UK roads. Aviva was one of the first insurers of motor vehicles more than 100 years ago, and we are proud to continue our role as an enabler of innovation by insuring one of the first purpose-built autonomous passenger shuttles operating on UK roads. The data from this trial will help us understand and shape the mobility insurance policies of the future."

Pierre Lahutte, CEO of Navya, said: "We are very pleased to be part of this trial at the renowned Harwell Science and Innovation Campus. This new deployment allows Navya to strengthen its technology with an additional use case in a complex environment and to contribute to the development of insurance practices for autonomous vehicles." 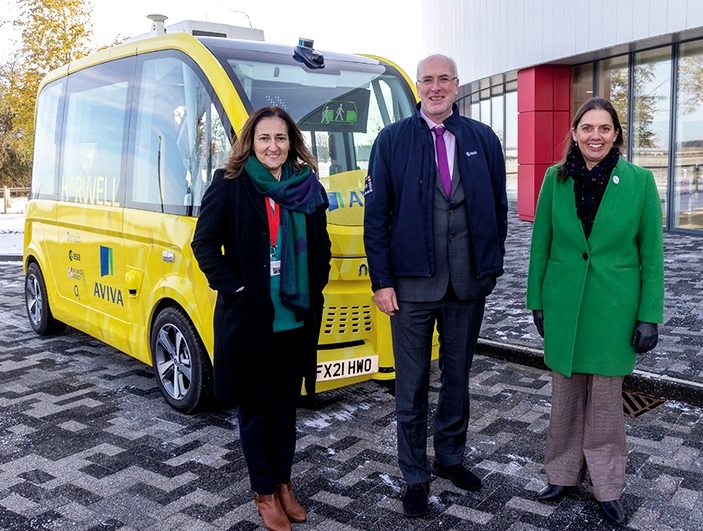