Home » News » Industry & Member News
Posted on 23 August, 2019 by Member News
The Defence Electronics and Components Agency (DECA) today announced the appointment of Alec Don as Chairman of the Board.

Alec Don, Chairman of the DECA Board.
Courtesy MoD / gov.uk


As Chairman, Alec will lead the DECA Board in supporting and challenging the DECA Executive Management Board to ensure delivery of MoD’s agreed strategic direction, objectives and business performance and providing direct support to DECA Chief Executive, Geraint Spearing who said: "Alec will bring a wealth of knowledge and experience to the DECA Board and I am looking forward to working closely with him in support of his role as Chair of the Agency Board."

Alec, who is an engineering graduate of Oxford University, spent the first part of his career within corporate finance at one of London’s long and established merchant banks working on flotations, mergers, acquisitions and takeovers.

This has been followed by over 20 years senior leadership experience within the ports industry, having held the senior positions of Chief Executive of Milford Haven Port Authority and prior to this Director of the Port of Liverpool and Chief Executive of the Maputo Port Development Company in Mozambique.

Alec’s wealth of experience also extends to a number of high profile non-executive roles including as Chairman and Vice Chairman of the British Ports Association, Welsh Ports Group and as a current member of the First Minister of Wales’ European Advisory Forum.

Alec Don said: "Located in Wales and with a highly skilled and loyal workforce, DECA is making a very significant contribution directly to our national defence and also working with Dstl to develop a Defence innovation hub and a potential second Advanced Manufacturing Research Institute at MoD Sealand.

"This is a very exciting time to be joining DECA and I very much look forward to working with Geraint and his team as DECA builds on its pivotal role within the UK’s global repair hub for F-35 avionic components in a vital economic growth area for the UK."

Alec took up his appointment on the 1st August 2019, replacing Alex Jablonowski who chaired DECA’s Board from the Agency’s formation in 2015, providing support and challenge to his fellow Non-Executive Directors as well as DECA’s Chief Executive and Executive Management Board.

The Department and all at DECA passed on their sincere thanks to Alex for his role in overseeing the Agency’s transformation from strategically retained maintenance, repair, overhaul and upgrade provider to a pivotal F-35 ‘global’ support partner on the world’s largest ever single defence project. 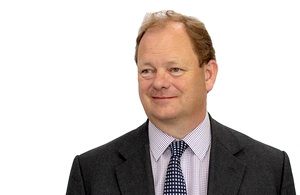