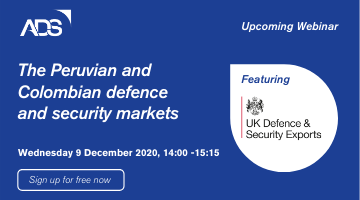 This on-line event is being jointly organised with UK Defence & Security Exports at the Department for International Trade. It forms part of a short series of information webinars on a number of prospective markets in the Latin American region, to promote greater awareness of the potential commercial opportunities there are for UK firms to do business there predominantly in the defence and security sectors.

The Peruvian Government has identified narco-terrorism and increasing cyber security capabilities in its National Security and Defence Policy. Alongside these lines, it has also identified more conventional focus areas such as increasing capability and participating in peacekeeping operations.

According to Peru’s National Security and Defence Policy, capability is to be improved by increasing interoperability, standardising equipment, increasing defence industrial capability, and raising training levels. Equipment procurement has embraced and increase a spectrum of conventional military capabilities, such as artillery and main battle tanks (MBTs), as well as systems and technologies more suited to the defeat of asymmetric and insurgent‐type threats.

Peru’s defence procurement policy has prioritised combating its internal threats, whilst they also hope to bolster their conventional military capability in an effort to match that of Chile. The Peruvian Government and the private sector are looking for new ways to improve internal security and digital transformation and are keen to partner with UK companies who have the capabilities that they are seeking.

There are opportunities for the UK in large defence projects and internal security requirements including:

The majority of the defence budget was designated for operational activities, such as payroll, procurement of basic goods and services, and pensions. A number of proposed procurement programmes have been postponed in recent years, as the Colombian Government sought to focus its attention on its predominant perceived internal threats arising from insurgency groups and organised crime networks, which are widely viewed as remaining the key national security threats.

Whilst the US continues to dominate the Colombian defence market, in recent years the scale of that dominance is widely perceived to have been reducing, as it has sought to diversify its sources of supply, and the UK  is one of those countries which has been seeking to have closer links to Colombia.

On the defence side, the most significant defence sale to Colombia was in 2017 when a contract was awarded to acquire 18 x L-118 105mm towed artillery pieces to the Colombian Army.

However, the incumbent US suppliers, who are well-established in Colombia, may still retain an advantage even as more acquisition is opened up to other countries and procurement becomes more competitive. Colombia continues to show considerable interest in upgrading its armoured, lightly armoured, and tactical vehicles to better control national territory and sensitive border area, has a number of maritime projects running and it has shown interest in acquiring combat aircraft, budget permitting.