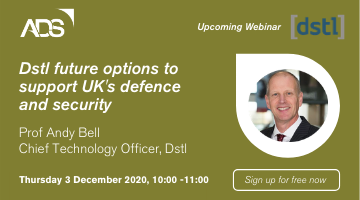 DATE CHANGE: Please note this has changed from 29 OCTOBER to the new date of 3 DECEMBER.

ADS are delighted to host a webinar with Prof Andy Bell, Chief Technology Officer, Dstl, who will give a discussion around options for S&T Planning and future direction for Dstl. Join this webinar to find out how industry can engage with Dstl and how Dstl is responding to COVID-19 to enable delivery to customers.

Following a degree in Chemistry at the University of Oxford, Andy obtained his PhD from the Department of Chemistry, University of Southampton, before joining Dstl (then CBDE) in 1994 after undertaking post-docs in Japan, France and Southampton. Andy became a Dstl Fellow in 2001 and accepted a two-year secondment to the Home Office as Chief Scientist for CBRN in 2005. Upon his return to Dstl in 2007, he was appointed Chief Scientist for Physical Sciences. Andy took over the Dstl Technical Directorate in 2012 and was CTO for Dstl from then until 2015.

As Head of the Centre for Applied Science and Technology (CAST) in the Home Office from 2015 to 2018, Andy led the organisation in providing S&T advice and solutions to support operational and policy development in policing, fire and rescue, borders and immigration, CT and security. He was integral to the CAST integration to Dstl.

Andy is both a Fellow of the Royal Society of Chemistry and of the Institute of Physics, and is a Council Member of the former. He holds a visiting chair at the University of Southampton Chemistry Department, is a Fellow of the University, and chairs the Chemistry Advisory Board. He sits on the Board of the Jill Dando Institute and is a member of the Advisory Committee to the Dawes Centre for Future Crime at UCL.

Andy accepted the now more-broadly defined Chief Technical Officer role for Dstl in October 2018 with responsibility for the direction and development of non-nuclear S&T capabilities to support the UK's defence, security and resilience, and sits on the Executive Management Committee and Board.

Andy is married with two children. In addition to spending time with his family, his interests include walking, brass bands and rugby union.