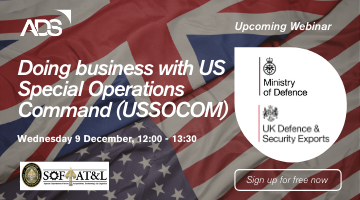 JUST LAUNCHED - This webinar will focus on the United States Special Operations Command (USSOCOM) , which is the unified combatant command charged with overseeing the various special operations component commands of the Army, Marine Corps, Navy, and Air Force of the United States Armed Forces.

ADS, the Ministry of Defence’s (MOD) Defence Trade Team in the British Embassy, Washington DC and the Department for International Trade’s UK Defence & Security Exports (DSE) are jointly running a series of webinars on the US defence market – the largest defence market in the world - to promote greater awareness of the potential commercial opportunities for UK firms to do business in the defence, space, security and cyber security sectors. This is the second in the series, with future webinars focused on the US Air Force, US Navy/US Marine Corps, US Army, US Space Force, Cyber, US Defence Primes, venture capitalists and more.

This webinar series will feature presentations by officials from the US DOD, US specialists, Defence industry and UK Government to provide information and advice on doing business in the lucrative US defence, space, security and cyber security sectors market and how UK industry can exploit the opportunities.

USSOCOM is headquartered at MacDill Air Force Base in Tampa, Florida. For reference, USSOCOM is approximately the same size as the British Army, with around 7000 operators deployed at any given time.

The Special Operations Forces Acquisition, Technology, and Logistics (SOF AT&L) Center is responsible for all USSOCOM, acquisition, procurement, research, development and logistics. The USSOCOM annual budget for FY 2021 is $13 billion, with around $3 billion of that going towards SOF AT&L procurement. The SOF AT&L research & development budget, which includes International Programs, accounts for about $730 million of the total procurement dollars.

SOF AT&L works closely with government, academia, and industry and foreign partners in meeting its mission to provide rapid and focused acquisition, technology, and logistics support to Warfighters, delivering the most effective capabilities to Special Operations Forces.

In this webinar we’ll be looking at the various ways UK companies can identify appropriate channels into the SOF AT&L organisation, and how best to exploit them.

Mark Williams will be providing an overview (pre-recorded) presentation that covers all aspects of the acquisition process, and then we’ll be hearing from a representative from USSOCOM Science and technology Directorate, who will talk about the programs and contracting opportunities available to the commercial R&D community.