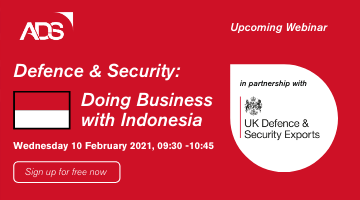 Join this webinar jointly organised with the UK Defence & Security Exports organisation at the Department for International Trade, to promote the potential commercial opportunities there are for UK firms to do business in Indonesia, predominantly within the defence and security sectors.

Documents published in August 2020 by the Ministry of Finance in Jakarta showed that the country's defence budget for 2021 has been set at IDR136.99 trillion (US$9.2 billion). The documents also show that the 2021 expenditure represents a 16.2% increase over the original 2020 defence budget of IDR117 (US$7.85 billion). The increase is attributed in part to the modernisation of the country’s Armed Forces, the improved well-being of its military personnel and greater indigenization of the country’s defence industry.

Modernisation is the key driver to Indonesia’s military procurement, framed around its ‘Minimum Essential Force’ (MEF) policy, the early stages of which were focused on internal threats, with subsequent phases geared towards acquiring a balanced military, capable of addressing wider regional threats, including addressing the escalating tension in the South China Sea. As such, planned multibillion-dollar equipment procurements under the MEF include multirole combat aircraft, tactical transport aircraft, additional submarines, air defence systems, armoured fighting vehicles and a range of surface combatants. Indonesia’s 2015 Defence White Paper highlights the concern that rapid economic growth in the region will lead to increased military development in other nations. Keeping pace with other countries drive Indonesia’s defence strategy in order to counter any uncertainty. Cyber security is specifically mentioned as a strategic area where keeping pace is perceived to be paramount. Lockheed Martin F-16V Block 70/72 Fighting Falcon Multirole Combat Aircraft is the most expensive planned acquisition in the Government’s defence priorities for 2020-2024, with a total of 32 aircraft planned to be acquired in a programme worth some US$2 billion.  Indonesia’s Navy is projected to acquire a variant of Denmark’s Iver Huitfeldt-class frigate design as part of its US$720 million frigate procurement program. A pair of hydrographic survey ships — also suitable for submarine rescues — have also been approved for US $143 million. The Army’s procurement plans include the acquisition of up to 10 Boeing CH-47F Chinook heavy-lift transport helicopters, which are also useful in humanitarian assistance and disaster relief missions.

In 2012, UK signed a Defence Cooperation Memorandum with Indonesia, and on 18th June 2019 UK and Indonesia held the Partnership Forum in London, to celebrate their 70th anniversary of diplomatic relations. Various agreements were signed, including covering counter-terrorism, cyber, economic cooperation. An MoU was signed to cooperate on maritime affairs. Whilst, back in the early-1990s, the UK used to be one of Indonesia’s largest defence equipment suppliers, between 2014 and 2019, the UK was the 12th biggest defence supplier to Indonesia, delivering: 500 x Starstreak Portable SAMs, 5 x Forceshield SAMs, and 3 x Bung Tomo-class frigates (originally built for Brunei).

Whilst there have been UK Government concerns about the supply of defence materiel to Indonesia in the past, it is now perceived to be a stable democracy, and any export licences are processed on the normal case-by-case basis, based on assessments of intended end-use and end-user against the standard EU Consolidated Criteria.

Indonesia’s offset policy is framed by the Defence Industry Law 2012, known as Law 16, the objective of which is to enhance indigenous capabilities and, thereby, reduce reliance on foreign suppliers. Offset obligations can be met through three channels: countertrade, local content, and/or technology transfer. Countertrade can be defence or commercial products such as palm oil or coffee. The countertrade, local content and/or offset should be 85% the value of the contract. Offsets are not consistently enforced especially in technology transfer and local content. Foreign contractors are often unable to identify local companies capable of absorbing technologies or undertaking production, and, in general, the percentage requirements of Law 16 are often not met. It is still pursued, and the Indonesian MOD and KKIP will continue to try to get the highest amount of engagement possible.

The Indo Defence, Indo Aerospace and Indo Marine Expo & Forum (https://indodefence.com/) is Indonesia’s premier national defence exhibition, with the delayed 9th in the series of biennial events currently due to take place in Jakarta on Wednesday 7th to Saturday 10th April 2021, and UKDSE is currently planning on organising a UK National Pavilion at this event.