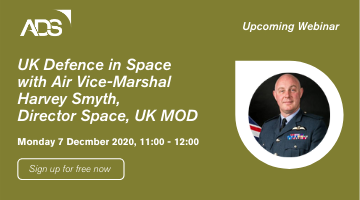 Following the success of our first space webinar earlier this year, we are delighted Air Vice-Marshal Harv Smyth, Director Space at the Space Directorate will be updating our members on the key areas under his domain including, leading the Space Directorate in the Ministry of Defence (MOD), responsible for defence space strategy, policy and capability planning.

This presentation will seek to update the audience on MOD position on space both in terms of policy and capability. Specifically, it will cover:

Smyth joined the RAF in 1991 via the Sixth Form Scholarship Scheme. After flying training he was posted to the Harrier Force and spent 15 years as a front line pilot and weapons instructor, finishing his time in 2010 as Officer Commanding Number IV (Army Cooperation) Squadron. He has conducted 100’s of combat sorties, flying from land bases and all 3 Royal Navy CVS aircraft carriers, on operations over Bosnia, Kosovo, Serbia, Iraq and Afghanistan. Throughout his career he has had the privilege to command at Flight, Squadron, Station, Force and Group levels.

Promoted to Group Captain in 2010 he became the UK’s National Director for F-35 Lightning, based in Washington DC, USA, returning after 3 years to retrain as a Tornado pilot and become Station Commander of RAF Marham. Promoted to Air Commodore in 2015 he became the Force Commander for both the Tornado and Lightning Forces. After a short period as Head of Carrier Enabled Power Projection in the Ministry of Defence in summer 2017, Smyth deployed to the Middle East where he was the Director of the Combined Air Operations Centre in Qatar, where he was responsible for the planning and execution of upwards of 1000 air & space missions per day across the Middle East. On promotion to Air Vice-Marshal, Smyth retrained as a Typhoon pilot and was appointed Air Officer Commanding No 1 Group in July 2018. In April 2020 he become UK MOD’s first Director Space.

Smyth has completed both Advanced and Higher Command & Staff Courses in the UK and has a Master’s Degree in Defence Studies. He was a member of the Exeter Business School Leadership Programme from 2013-18, has completed the UK Pinnacle Course, is a member of MOD’s inaugural Advanced Defence Senior Leadership Programme, and the UK Government’s National Leadership Programme. He was awarded the Distinguished Flying Cross (DFC) in 2003 for air operations over Iraq’s Western Desert, and was appointed Officer of the Order of the British Empire (OBE) in 2011. He received the Meritorious Service Medal and the Legion of Merit from the US Sec Def in 2013 and 2018 respectively. From 2013-15 Smyth had the honour of being an Aide de Camp to Her Majesty the Queen.

Married with 2 daughters, Smyth’s interests beyond family and flying include: walking his inexhaustible Springador dog; rugby (once a flanker, now a spectator); reading; and, completing ‘charity fitness challenges’. He is a Patron of the Jon Egging Trust (supporting troubled teenagers), a Vice-President of RAF Rugby, the President of the RAF Small Arms Association, and is a Board Member of the Freeman Air and Space Institute. With strong links to Northern Ireland, Smyth is also Honorary Colonel for the 2nd Battalion (Northern Ireland) Army Cadet Force, Senior Mentor to the Northern Ireland Universities’ Air Squadron (NIUAS), and Patron of the Ulster Aviation Society.