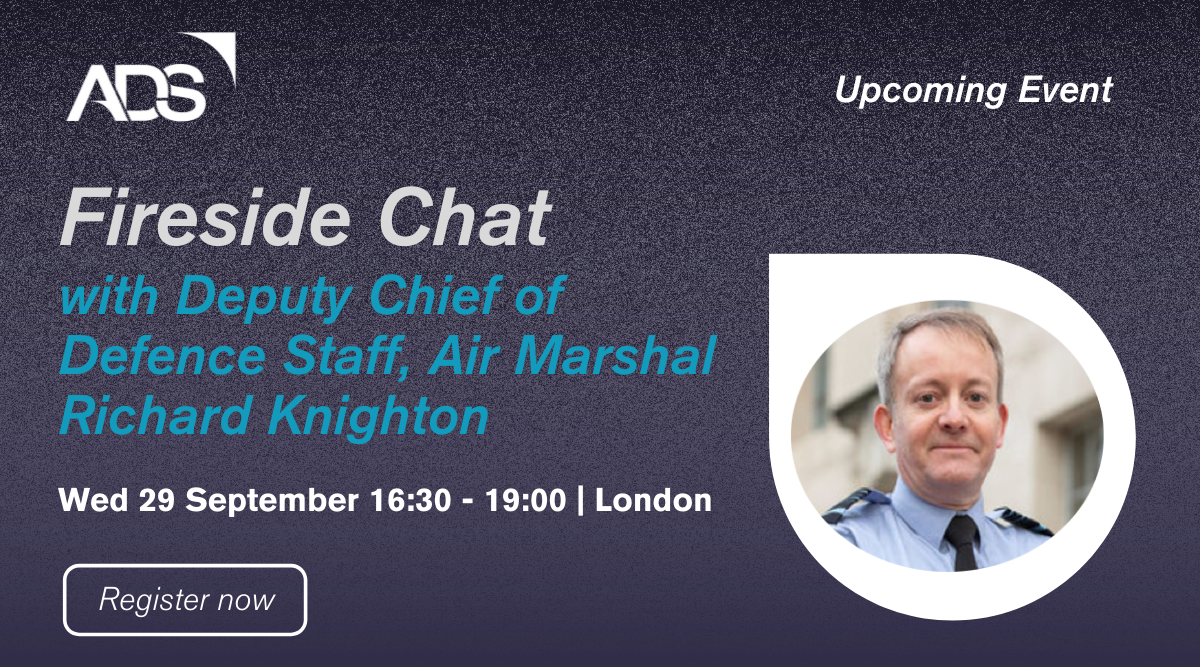 We are delighted to announce the ADS Fireside Chat with Deputy Chief of Defence Staff, (Financial and Military Capability), Air Marshall Richard Knighton.

Join us to hear from Air Marshall Richard Knighton in person, as we resume our in-person defence events programme. AM Knighton joined the RAF in 1988 as a University Cadet and studied at Clare College Cambridge graduating in 1991.  He spent his early career working as an engineer officer on Nimrod and Tornado F3 aircraft and several tours on the Harrier force including being Senior Engineer Officer on 20 Sqn – the Harrier Operational Conversion Unit – at RAF Wittering.  After 2 years in this role, including a short stint as Senior Engineer Officer on 1 Squadron in Italy during the Kosovo campaign, he was posted to the Tornado Integrated Project Team as the fleet manager for all marks of Tornado.

He attended Advanced Command and Staff Course in 2003/4 before returning to the Harrier Force, this time as head of the team charged with transforming the way the Harrier was supported by industry.  After 18 months in post he was selected to be the Military Assistant to Deputy Chief of Defence Staff (Equipment Capability) in MOD.  He was promoted to Group Captain in mid-2007 when he became Deputy Assistant Chief of Staff Strategy and Plans at Air Command at RAF High Wycombe.  He attended the Royal College of Defence Studies in 2009, after which he took up his appointment as the RAF’s Logistics Force Commander and Station Commander at RAF Wittering.

In 2011 he was promoted to Air Commodore and became Head of Finance and Military Capability (Air) in the MOD before setting up and leading the Future Combat Air System (FCAS) Programme in 2014.  In January 2015 he was promoted to Air Vice-Marshal and appointed as the Assistant Chief of the Air Staff.  In this role he oversaw the development of the RAF’s strategy and the planning for the RAF’s Centenary celebrations.  He became Assistant Chief of Defence Staff (Capability and Force Design) in 2017.  He held this role for a little under 2 years before he was promoted to Air Marshal and appointed to his current role as Deputy Chief of the Defence Staff (Military Capability).

Air Marshal Knighton is married to Caitlin, who is a partner in a large law firm in Cambridge; they have 2 teenage daughters.  He is President of Combined Services and RAF Powerlifting and President of RAF Hockey and the RAF Winter Sports Federation.  Away from work he maintains his pilot’s licence, is a keen skier, a below-average sportsman, and would like to do more sailing.