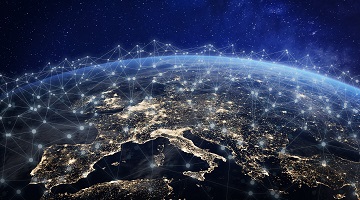 Our first Defence Space Fireside Chat will be delivered by Group Captain Rayna Owens, Deputy Assistant Chief of Staff Space Capability, HQ Air Command. A full synopsis will be published in due course.

Air Operations by background, Group Captain Owens completed early tours in the UK on Air Defence operations (including training, examining and STANEVAL posts) as well as leading data link training and overseeing instructors at the School of ABM.

As a Squadron Leader, she completed tours at No 2 Group on procurement of the current Air Surveillance and Control System and the Air Warfare Centre as the Executive Officer on the Air C2 ISR OEU before moving to MOD to work as a Military Assistant to the Vice Chief of Defence Staff. This was followed by a scrutiny job in MOD where she provided scrutiny for RAF Projects and Urgent Operational Requirements, and input to NATO and EU planning and force structures.

On promotion to Wing Commander she attended the Advanced Command and Staff Course at the Joint Services Command and Staff College Shrivenham before a tour in the Operations Directorate at the Ministry of Defence (MOD), responsible for UK Operations, MOD crisis facilities and the MOD input to National Counter Terrorism and Resilience Exercises. Following this she served with the Joint Force Air Component Headquarters, the UK deployable Air HQ initially leading A7 Training and Standards were her responsibilities included coordination of training and exercise programmes for UK and deployed Air C2 operations, Expeditionary Air Wing and Air CT training. Moving into the COS position in March 11 Wg Cdr Owens assumed command of the unit in the UK during operations in Libya.

Wg Cdr Owens commanded RAF Fylingdales October 2011 to January 2014, the RAF’s Missile Warning and Space Surveillance radar in her first dedicated space post. During this tour, she oversaw re-let of the critical Operations and Maintenance Contract and the 50th Anniversary Celebrations establishing a heritage and children’s exploration centre on base. On return to the Ministry of Defence she moved to a space post in the Air Staff expanding MOD and broader Defence understanding and involvement in Space. This included conducting a manning and cadre development review leading the UK input to the AFSPC Schriever Space wargame series and involvement in Head office and governance reviews as well as organising and managing the inaugural Defence Space Conference. She was also central to UK work on the Combined Space Operations initiative and a range of collaboration activities across Government and with key allies and partners. She moved to HQ Air Command in July 2018 on promotion to Group Captain into a newly created Space Capability post where she currently leads a small team focused on capability development and delivery and force development. Operational Tours include the Falkland Islands (1999); an LNO post in the UK Maritime Component for OP TELIC (2003) and a long-range plans post in the ISAF Joint Command in Kabul (2010).

In what little spare time she has Rayna enjoys running, a variety of multi-sport events, visiting National Trust and English Heritage properties and walking her chocolate Labrador Oban.