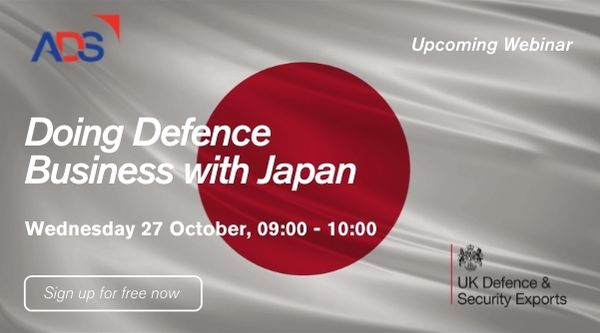 ADS, UK Defence and Security Exports at the Department for International Trade and the UK Embassy in Tokyo are jointly organising an information webinar on the Japanese defence market, to promote greater awareness of the potential commercial opportunities there are for UK firms to do business there in the defence sector.

There is considerable interest in doing defence business with Japan; we are both very close allies of the US, and Japan and the UK are each other’s closest security partners in Asia and Europe respectively, with shared values and common strategic interests. They already have in place a number of agreements to try to enhance mutual defence and security-related cooperation, and the UK Government is determined to further deepen the bilateral defence and security relationship between the two nations.

Japan released the “Defense of Japan 2021” White Paper on 13 July 2021; this document is notable as it demonstrates Japan’s seriousness towards its defence preparedness. The paper is an overview of Japan’s perception of its strategic environment and its challenges, its alliances and its readiness. In the face of specially spelt out threats from the People’s Republic of China, Russia and North Korea, the paper includes an increase of the defence budget beyond the 1% of GDP mark with some 5.34 trillion Yen (or US$48.75 billion/£35.05 billion) to be spent.

The US is far and away the largest defence supplier to Japan, but the UK still takes the second largest slice of the Japanese defence market, and Japan has been identified as being one of the UK Defence Industry’s key priority markets, although, given the great capability strength of Japan’s indigenous defence industry, much of the potential commercial opportunities would have to be in the form of joint development programmes, rather than export sales from the UK to Japan, although this is also possible in certain, niche areas.

Clarion is planning on organising the second in its series of major defence exhibitions in Japan, with its DSEI Japan exhibition, due to take place in Tokyo from 26 - 28 January 2022.