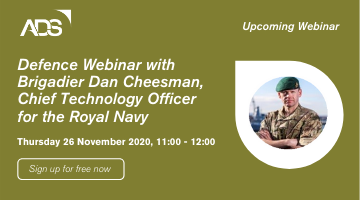 Following the launch of NavyX in April 2019, Brigadier Dan Cheesman will update members on how industry can continue to accelerate the use of technology in the Royal Navy. Dan will give updates on NavyX, Nemesis and Nelson following last year’s popular Fireside Chat.

Returning to 40 Commando, he commanded Bravo Company Group in Sangin, Helmand Province, Afghanistan on Op HERRICK 7 for which he was appointed MBE.  Following a period commanding 40 Commando’s Command Company, he moved to the Ministry of Defence working on Counter Terrorism.  Promoted Lieutenant Colonel in 2009, he attended the Advanced Command and Staff College before assignment to FLEET Operational Policy as the Royal Navy's liaison officer to PJHQ and lead planner during the Arab Spring.  In 2012, he was selected as Chief of Staff Headquarters 3 Commando Brigade Royal Marines as the formation reoriented from Afghanistan to contingency operations, which included amphibious deployments to the Mediterranean and Gulf.

In 2013, he was given the honour of commanding 45 Commando Group Royal Marines (‘the Mighty Four-Five’) deploying to California, Norway, the Netherlands and Belize in preparation to assume responsibility as the UK’s standby Lead Commando 2015.

On promotion to Colonel, he became the RN’s lead for Information Warfare Development and in 2018 was appointed as the inaugural Chief Technology Officer (CTO) to the Navy Board where he has oversight of the Royal Navy’s technological needs and acts as an internal and external catalyst for accelerated change across Digital, Autonomy, Lethality and Agility.  In 2020, in-role as the CTO, Dan was promoted to Brigadier and made a Member of the Navy Executive Committee (NEC).

Dan is married to Jo, an executive coach, they have two very energetic young children, and when not learning how to be a Dad, the Ducati, ski mountaineering, kite surfing, mountain marathons and kayaking are next on the list.