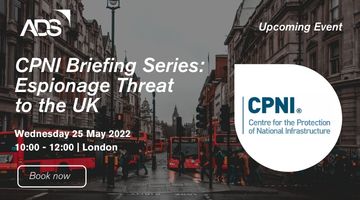 As part of joint efforts between ADS & UK Government to help raise security awareness, ADS are hosting a series of events with the Centre for the Protection of National Infrastructure (CPNI). These events will be run in person from the ADS London office and the next in the series will cover 'Espionage Threat to the UK'.

This briefing series will be of relevance to all ADS members across the four sectors; aerospace, defence, security, and space, and we would encourage as many members to attend as possible.

The potential impact of successful State-sponsored espionage against the UK is both wide reaching and significant. The threat of espionage (spying) did not end with the collapse of Soviet communism in the early 1990s. Espionage against UK interests still continues and is potentially very damaging. A number of foreign intelligence services (FIS) seek to gather intelligence on a broad range of subjects, including foreign policy, defence, financial, technological, industrial and commercial interests.

Most governments rely on a range of information being gathered to guide their decisions. This is not the same as espionage.

Espionage is the process of obtaining information that is not normally publicly available, using human sources (agents) or technical means (like hacking into computer systems).  It may also involve seeking to influence decision-makers and opinion-formers to benefit the interests of a foreign power.

The Centre for the Protection of National Infrastructure (CPNI) is the United Kingdom Government authority which provides protective security advice to businesses and organisations across the national infrastructure.

CPNI was formed on 1 February 2007 from the merger of predecessor bodies the National Infrastructure Security Co-ordination Centre (NISCC) and the National Security Advice Centre (NSAC). NISCC existed to provide advice to companies operating critical national infrastructure, and NSAC was a unit within MI5 that provided security advice to other parts of the UK Government.