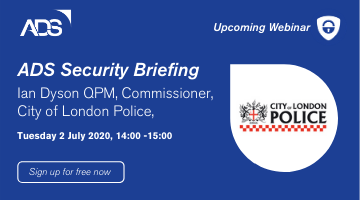 We are delighted to announce that we will be joined by Ian Dyson QPM, the Commissioner of the City of London Police (CoLP), who will brief members via webinar on the current priorities and responsibilities of the City of London Police in combating the threat to the UK and UK interests, and how industry can best work with and support the CoLP in its contribution to UK national security. ​​​​​​​​

About the City of London Police (CoLP)

The CoLP is the territorial police force responsible for law enforcement within the City of London, including the Middle and Inner temples. The City of London, which is now primarily a financial business district with a small resident population but a large commuting workforce, is the historic core of London, and has an administrative history distinct from that of the rest of the metropolis, of which its separate police force is one manifestation. The CoLP Economic Crime Directorate is also recognised as the national policing lead for fraud and is dedicated to preventing and investigating fraud at all levels. This will be an excellent opportunity for members to hear first-hand from a key stakeholder in ensuring the safety and economic prosperity of the UK and gain further understanding of how industry can aid the CoLP in achieving its objectives.

Ian Dyson joined the City of London Police as Commander in September 2010 leading initially on organisational change, and later as the chief officer lead on Economic Crime, expanding the Force’s national fraud responsibilities. He was also the National Police lead for Contact Management and led the national roll out for the 101 non-emergency number. Two years later he was promoted to Assistant Commissioner leading cultural change, leadership and development within the Force, embedding staff empowerment and innovation. His portfolio covered Performance Management, Business Continuity, the Transformation Programme and Strategic Development. He was promoted to Commissioner on the 3rd of January 2016 and was awarded the Queen’s Police Medal in the New Year Honours 2016.