UK built satellite takes off to learn about the Sun

Earlier this week in Florida the ESA satellite Solar Orbiter took off on its mission to orbit the Sun where it will capture unprecedented views of our star’s poles. The satellite is a European Space Agency programme which was designed and built in Stevenage by Airbus Defence and Space.

The Solar Orbiter’s mission is to scrutinise the Sun in unprecedented detail. Travelling closer to the Sun than the planet Mercury it will make comprehensive measurements of solar winds, solar eruptions and help forecast solar activity.

A unique element of this mission is the plan for the Solar Orbiter to take the first-ever images of the Sun’s North and South Poles, which scientists believe could be the missing piece in understanding the Sun’s solar activity.

Scientists hope that Solar Orbiter can fill in knowledge gaps in models of the Sun’s magnetic field, which drives the 11-year solar cycle. Over the 11-year long solar cycle, the Sun ejects material known as the solar winds. This material can affect us here on Earth, creating beautiful auroras in the sky but it could also interfere with communications systems and power grids causing mass devastation. By studying the Sun up-close, Solar Orbiter will help scientists better understand these processes and possibly predict these solar winds in the future.

This mission, of course, doesn’t come without difficulties; with the UK-built satellite travelling so close to the Sun it will have to endure temperatures exceeding 500°C, hot enough to melt lead. Its unique heat shield covered in a special heat-emitting coating that will protect the spacecraft behind the shield from the extreme heat of the Sun at this close distance.

Solar Orbiter is just one example of the UK’s innovative and growing space sector. Airbus in Stevenage has also developed and built the ESA Rosalind Franklin Mars Rover which could be launched to the red planet later this year. Another example is Skyrora in Edinburgh who tested an innovative high-grade fuel made from waste plastics designed to minimise the environmental impact of rocket launches.

Find out more about the UK’s space sector. 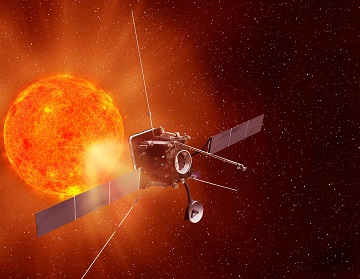