A copy of the Prime Minister’s statement in the House of Commons is available online here.

You can also read a copy of the Hansard of today’s debate online here – or watch it again on the Parliament TV channel here.

Key announcements in the SDSR include:

Our summary for ADS Members is available online here.

“The Prime Minister has delivered a well-conceived and pragmatic response to the new and challenging threats to our national security.

“The commitment to additional equipment, services and support, along with the financial stability provided in the Chancellor’s Summer Budget, provides the best framework for the UK defence and security industries to contribute to the safety of our nation.

“This SDSR has been marked by a significant level of engagement between Government and industry, and we look forward to continuing this approach into implementation.

“The focus on innovation, support for exports, and a refresh of the 2012 industrial policy are extremely welcome. The commitment to support UK SMEs and provide early and more structured access to defence and security procurement opportunities will be supported across industry.

“The strategy recognises the importance of industry’s contribution to supporting national security and prosperity. Highlighting the role of defence and security exports reinforces their essential part of the UK’s efforts to support our allies and international partners. They make joint operations easier and more effective, and help vulnerable nations build the security and stability required to combat the threats posed by terrorism, organised crime and mass migration.”

Following the Prime Minister’s statement, the SDSR and NSS document has been published online.

You can read a copy here.

Ahead of the SDSR, Elizabeth Gwilt, Public Afffairs Adviser at ADS, highlights key points from Defence Oral Questions in the House of Commons:

Oral Questions to the Secretary of State for Defence

The Defence Secretary Michael Fallon has just started taking oral questions from MPs in the House of Commons. You can watch online here.

The Prime Minister’s statement on the SDSR will follow straight after oral questions at approx. 3.30pm.

Also this week we will find out the results of the government’s Spending Review.

In his Summer Budget the Chancellor took the decision to protect defence spending.

Here’s a quick recap of what the Chancellor announced in July – the government will:

Mary Kearney, ADS Head of Media, takes a look at the key themes emerging ahead of the SDSR:

What are the themes we can expect to see in today’s SDSR?

Speaking at RUSI in September, the Defence Secretary Michael Fallon said this SDSR would “be more international, more efficient and more innovative”.

This was echoed by Jon Thompson, the Permanent Under Secretary at MOD, who speaking to DE&S staff about the NSS and SDSR highlighted:

Four National Security Objectives emerging from work on the SDSR:

Five key defence themes being developed in the SDSR:

International collaboration is expected to be one of the key themes and this morning the Prime Minister was in Paris for talks with French President Francois Hollande, where they discussed how they can further strengthen the counter-terrorism co-operation between the UK and France. The PM said: “The UK and France are already doing this but today we have agreed to step up our efforts even further and to work more closely with our European neighbours.”

ADS’ Head of Public Affairs, Duncan Sinclair, analyses a recent report published by the Defence Select Committee on the SDSR:

Over the weekend the House of Commons Defence Select Committee published the report of their inquiry ahead of the publication of the SDSR and NSS.

Calling for military flexibility, the Committee argues that Britain should develop versatile Armed Forces capable of adapting to a range of potential crises, rather than trying to predict which of them will actually occur.

The report sets out a checklist of potential threats and vulnerabilities which the Committee says should be addressed in the SDSR. They will use this checklist to evaluate the SDSR in the weeks and months to come.

The report also quotes evidence from ADS Group highlighting the importance of a strong domestic industrial base in order to deliver flexible capability:

“A vibrant domestic industrial base enhances the probability of the armed forces and security services receiving the capabilities required for operations. It also offers government the capacity to rapidly increase production of capabilities, or modify existing capabilities, to meet a specific threat.”

In an increasingly complex security environment the government and industry should work together to secure an agile industrial base and prioritise investment in innovation and technology in order to enhance the UK’s capability to identify, assess and respond to rapidly evolving threats.

Duncan Sinclair, Head of Public Affairs, comments on the SDSR:

This afternoon the Prime Minister will make a statement in the House of Commons, publishing the 2015 Strategic Defence and Security Review.

The Prime Minister is due to speak at 3.30pm – but we already know some of what he will announce from speeches and press coverage over the last week.

What we do know so far?

The PM will announce an additional £12bn of defence equipment spending – taking the total investment over the next decade to £178bn.

This will include nine new Boeing P8 maritime patrol aircraft for maritime surveillance, anti-submarine and anti-surface ship warfare. The aircraft will be able to carry torpedoes, as well as being fitted with a broad range of sensors, including radar and sonobuoys.

The government will extend the life of multirole Typhoon for extra 10 years to 2040, giving a total of seven squadrons, and fitted with new Active Electronically Scanned Array radar.

Yesterday the Chancellor announced that by 2023 the UK will have 24 new F-35 Lightning jets available – a trebling of the eight currently planned – as part of an order for 42 jets by 2023, and 138 jets overall. Britain is the second-largest partner in the F-35 programme – manufacturing parts including air frame components, the lift fan and the ejector seats.

It is expected that the plan to field fleet of 13 new frigates will be scaled back, and there will not be a new Type 26 to replace each of the Type 23s on a one-for-one basis. The BBC has reported a cut in orders for Type 26 frigates from 13 to 8.

Two new ‘Strike Brigades’ will be created by 2025. They will use the new Ajax family (previously known as Scout) range of vehicles, comprising 6 variants and almost 600 armoured vehicles.

The PM has written for the Telegraph about his visit to Paris this morning and ahead of the SDSR publication this afternoon. You can read his article online here.

Paul Everitt, Chief Executive, ADS Group, spoke on BBC Radio 5’s ‘Wake Up to Money‘ programme (28.37), and LBC’s ‘The Morning News’, to discuss how industry has worked closely with Government ahead of the SDSR. 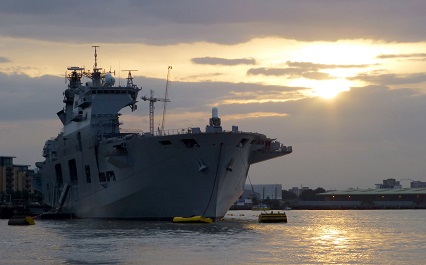