Figures released today by the Office for National Statistics (ONS) show that UK gross domestic product (GDP) contracted by 0.2% in Quarter 2 (Apr to June) 2019 following growth of 0.5% in Q1 2019. This is the first quarter since 2012 that there has been a decline in GDP.

2019 has already been a turbulent year for the economy. Businesses in Q1 were focused on a lead up to the original Brexit date of 29 March. Firms, especially those in manufacturing, were pulling forward production, stockpiling and creating a cushion for themselves with the risk of No Deal. The fall in manufacturing in Q2 is the biggest in a decade and falls in production overall are the biggest since 2012. The service sector saw its slowest growth in three years.

In Q2 UK manufacturing saw a 2.3% decline on Q1.  A combination of factors will have weakened manufacturing GDP. The Index of Production data also released by the ONS today gives a more detailed picture of individual sectors’ contribution to growth or decline in recent months.

April, the first month in Q2, was a low output month as some manufacturing firms went into annual shut down early following Brexit uncertainty, and others would have found themselves using the built-up stock instead of increasing production.

The combined UK sector for Aerospace manufacturing, repair and maintenance declined 3.8% in Q2 from Q1.  Aerospace manufacturing experienced little to no change over the first six months of 2019, excluding a spike in March. The repair and maintenance elements of the sector remain much more volatile, contributing to the overall decline of the sector.

As already noted, the planned early shut downs of car plants contributed most of the quarterly decline in manufacturing, with automotive production down 9.9% in Q2 compared to Q1.  The pharmaceuticals sector fared similarly to aerospace with a 3.4% decline.

Given the severity of the decline in manufacturing output, the overall decline in GDP of 0.2% could have been worse if it wasn’t for the growth in services. The services sector was the only positive contributor to GDP growth in Q2 at 0.1%.

The uncertainty caused by Brexit can mostly explain the choppy GDP data for the first half of 2019. Q2 is likely to be a temporary dip, and not an economic collapse as firms rebalance themselves following the Q1 No Deal Brexit preparations that were postponed.  We could see GDP moving back into positive territory for Q3 as firms look at once again ramping up preparations for Brexit on 31 October. As the quarter is ongoing, we will have to wait and see how the economy has fared against the uncertain political backdrop. 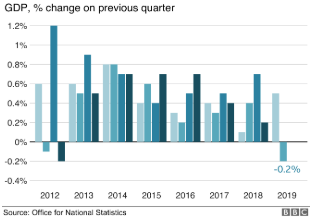