Posted on November 29, 2019 by Heather Gilchrist

Scottish First Minister Nicola Sturgeon unveiled the SNP Manifesto this week. It had a slightly different flavour to the other parties’ launches as the Party is only standing candidates in Scotland. The central pitch to Scottish voters was that voting for the SNP could prevent a majority Conservative Government and send a strong signal against Brexit and in favour of a second referendum.

The SNP’s central defence related pledge remains to scrap the Trident nuclear programme. They also highlight the environmental cost of the military, with a call for MoD to take environmental concerns more seriously.

A key pledge is also to retain existing bases and regiments in Scotland. More broadly the SNP promise to fight for the delivery of all contracts for Royal Navy Fleet Solid Support Ships to be restricted to UK shipyards. However, the Manifesto claims that only some of the Type 26 ship building work is being done in Scotland, when in fact most of it is. ADS has called for procurements factors that promote high value jobs, intellectual property generation, skills and apprentices, and capital investment in the UK to be prioritised.

As with the other manifestos, the environment receives a large amount of coverage. The Manifesto states that “aviation emissions should be counted within national emissions and targets”. In terms of reducing emissions, the Manifesto highlights the Scottish Government’s targets of a 75% reduction in emissions by 2035, net zero carbon emissions no later than 2040 and net zero of all emissions by 2045. The SNP specifically points to the ongoing work to making the Highlands and Islands the world’s first net zero aviation region by 2040, with trials of low or zero emission flights, including electric planes, starting in 2021.

In its election priorities for Government, ADS has set out that the next Government must invest in innovation, including long term funding for the Aerospace Technology Institute, to secure the economic benefits that will come from new sustainable technology.

The Manifesto is consistent with the SNP’s longstanding Brexit policy, which is to work with other parties to stop Brexit via holding a second referendum. If this cannot be delivered, they pledge to work to remain as aligned to the EU as possible, ideally by remaining in the single market and customs union.

Nicola Sturgeon also set out her negotiation priorities should the Labour Party seek to form a Government with SNP support. These include backing the principle of a second referendum on Scottish independence, greater devolved powers on immigration, employment and drug laws, and an end to austerity.

You can find a two-page summary of the SNP Manifesto below, read about ADS’ election priorities here and access the full document on the SNP website. 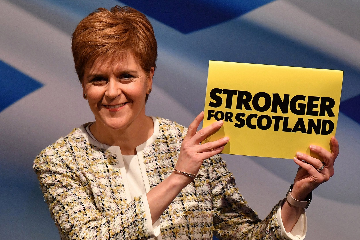