On Sunday, Boris Johnson launched the Conservative Party’s manifesto. As predicted, it was heavily focused on their pledge to deliver Brexit. Shorter than its 2017 predecessor, it argues that delivering a Conservative majority will mean Brexit is secure, enabling the Party to roll out its domestic programme.

The manifesto commits to supporting the “UK’s world-class defence industry”, through investment in the new Type 31e frigates, reiterating the importance of British shipbuilding, as well as development of the new generation of armoured vehicles. The manifesto’s key defence pledge was – as previously announced – to exceed the NATO target of spending 2% of GDP on defence and increase the budget by at least 0.5% above inflation every year.

On aerospace issues, the manifesto says that the Conservatives will “build on Britain’s pioneering work in electric and low carbon flight”. ADS has set out as a priority that the next Government must invest in innovation, including long-term funding for the Aerospace Technology Institute, to secure the economic benefits that will come from new sustainable technology.

The manifesto also specifies that Heathrow expansion will not be given any new public money and there is a focus on air traffic control as a means to reduce delays and cut pollution.

On Brexit, there are commitments to deliver Brexit and subsequent trade deals as quickly as possible. The manifesto pledges to ensure the Withdrawal Agreement Bill is voted through Parliament, thereby delivering Brexit by 31 January. It also states that a trade agreement with the EU will be negotiated by the end of the transition period (December 2020), with a commitment not to extend the period beyond that date. In terms of trade agreements with other countries, there is an aim to have 80% of UK trade covered by free trade agreements within the next three years, starting with the USA, Australia, New Zealand and Japan.

A focus on the space industry runs through the manifesto, where many of the R&D spending pledges relate to space technologies and space is specifically mentioned as one of the priority areas for future R&D spend. There is also a stated intention to create a National Space Command.

As with the other parties’ manifestos, the environment and climate change is a key issue. The Conservatives announced a number of policies including the creation of a new Office for Environmental Protection, a levy on the production of plastics, the introduction of producer responsibility for waste and funding for energy intensive industries to move to low carbon techniques. 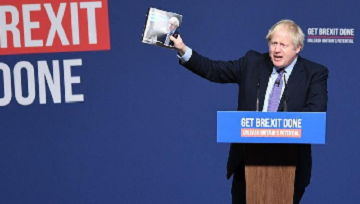