In focus: Defence and Sustainability

Ahead of COP26 ADS is running an ‘In Focus: Countdown to COP26’ blog series, helping you make sense of the work the aerospace, defence and space sectors are undertaking to tackle climate change and deliver net zero by 2050. This blog was written by Reg Pula, ADS Policy Advisor Defence and focuses on UK defence and sustainability.

UK Defence has an undoubtedly important role to play in delivering the UK’s climate ambitions, in particular through the delivery of the UK Government objective for all departments to achieve Net Zero (zero emissions) by 2050.

The Ministry of Defence (MOD) recognises that it is the largest single contributor to the Government’s own carbon footprint, accounting for half of all emissions. Military aviation is the largest consumer of defence fuels, accounting for two-thirds of defence fuel consumption. If the Government is to match its own legal obligation to Net Zero, the MOD will have to substantially reduce its emissions by 2050 while maintaining critical military outputs.

The MOD’s operational environment is also changing directly as a result of climate change. The Armed Forces will have to operate in more extreme weather conditions, which in themselves can exacerbate the drivers of conflict and pose significant challenges to the UK’s national security – the Darfur crisis is widely recognised as an exemplary case in this regard.

The MOD’s Climate Change and Sustainability Strategic Approach, released in March earlier this year, recognises these challenges and serves as a call to action. It sets out three ‘epochs’ for Defence’s adaptation:

This incremental approach reflects the understandable challenge the MOD have in forging, in the short term, an effective balance between climate adaptation and mitigation on one side and military efficacy and output on the other.

A renowned adage maintains that if one chases two rabbits, one will end up with neither. But UK Defence has the innovative capacity to produce world-leading ‘green’ capabilities that can achieve both objectives simultaneously.

New hybrid electric systems being tested on the Army’s Jackal vehicles and the RAF’s push to use sustainable fuels are demonstrative of UK Defence’s ability to rise to the global challenge that is climate change. ADS and industry will continue to support the Government as it seeks to deliver upon its climate ambitions. If you’d like to learn more, please contact Reg Pula. 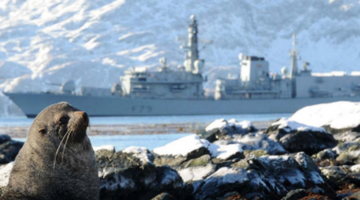